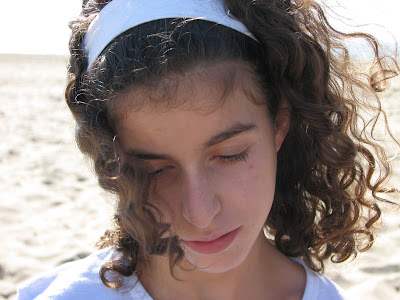 This week's theme for Corner View is the beach, and because I live about seven miles from the coast of southern California, it seems too easy to post photos of it, even if it is my corner of the world.

Instead, though, I'm reposting something I wrote about Sophie, my daughter, who loves the beach more than anything. We went in early March, on her birthday.

So hope for a great sea-change
On the far side of revenge
Believe that a further shore
Is reachable from here.
Believe in miracles
And cures and healing wells.

From The Cure at Troy by Seamus Heaney

The last movie I saw before I gave birth to Sophie was based on a story about selkies called "The Secret of Roan Innish." A weird and wonderful movie, it would become almost emblematic for me after Sophie was born and we found ourselves on the path that would lead us to California. Celtic mythology relating to the sea is magical, and what has always fascinated me were the stories of selkies -- seals who shed their skins and take human form. A female Selkie leaves her skin and comes ashore as a beautiful maiden, and while most sea creatures in myth are frightening or hostile, seals, with their soft, mournful eyes are transformed into gentle earthly beings. If humans capture her skin, the selkie is forced to stay human and is described, generally, as a fine, wistful woman. If she finds her skin, however, she immediately returns to the sea, leaving those she loves to mourn for her.

Sophie's hair is soft and curly and her features are fine. She holds herself delicately, almost gingerly, and is often described as otherworldly. When we began taking her to an osteopath in southern California after a good year's worth of fruitless medical treatment in New York, we noticed that her symptoms subsided by the ocean. Fourteen years later, to this day, Sophie is transformed by the ocean. The moment her bare feet feel the sand, she pulls insistently toward the water. We have said that the water is pulling her toward it, so dramatic is the change in her level of alertness. She doesn't have seizures by the sea. She looks out, over it and smiles a half-smile. I like to think that like a selkie she is searching for her lost world and that she is actually lost in ours. She shed her skin and was born to me, pulled unwittingly into a world that insists on keeping her.

We went to the ocean today, Sophie and I. We walked on the sand and down to the water. Sophie lifted her head and really gazed out to the sea. Happy Birthday, my Sophie-girl, my selkie.