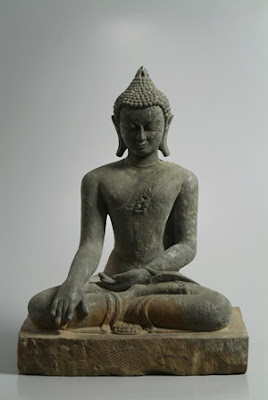 
When people, including some of my closest, dearest friends, see Sophie, they always say, Oh, she looks so good! They comment on her beautiful hair, her beautiful face, her "fashionable" clothes.

A couple have even said, You know, she looks so good! I've never even seen her have a seizure! While I know, perfectly well, that they're being gracious, that they're expressing incredulity that someone so beautiful could actually have such a hard time of it, it also always strikes me in a curious way that there might be the tiniest implication that maybe, just maybe it isn't so bad? Because certainly they hear it from me, they read it from me, they know that something is bad because Sophie can't talk or go to the bathroom or eat by herself or really do anything by herself so it's got to be at least that bad. But I think, too, that most people want things to be better and they often want me to reassure them that things are all right. The alternative is just too much, I imagine, for them to consider.

But she always looks so good!

Tonight, I was at a party and children were invited. Generally, I don't bring along Sophie to these things because she's really not so great in a crowd. She is uncomfortable and, frankly, I'm uncomfortable. I can't really relax, enjoy myself, eat or drink and I feel vigilant. The way one might feel with a small toddler at a pool party. That kind of on-edge, distracted vigilance. Tonight, though, I brought Sophie along with the boys because she had been having an exceptionally good day. In fact, she's had a really good week. Dramatically reduced seizures, good nights and a spring in her step. I told a friend that I hated to jinx it, but I thought the homeopathic remedy might actually be working again. Too early to tell, I hedged, but it seems good. And then I knocked wood three times.

I was talking to a friend at the party who knows me, knows Sophie but has probably never really seen a big seizure before. And probably right after I had whispered that she hadn't had a seizure all day and I was so pleased with that, well, Sophie had a really big seizure. My friend stood up as I stood up and asked me what she could do. I told her nothing, just stand here and sort of block the whole thing for me. So she stood on one side of the stroller and I stood on the other, bent over Sophie as she seized. It was a big, long, ugly one, with groans and stiffening and jerking arms and legs. Sophie's face twists to the side and her eyes roll up and blink monotonously. I always go into a sort of protective crouch over her, almost like filling up the space around her so that she is shielded -- from eyes and sounds and enquiries. I think that I am probably really good at this because people were coming and going around me, drinking their margaritas and calling to one another. I've done this in so many public places that I'm almost certain that no one actually sees it. And in case you didn't know, there's really nothing one can do during a seizure but make the person comfortable as best as you can, make sure they are not choking and wait.

Wait until it's finished and she stops and then it's just some twitching and an exhausted sigh and her eyes flutter and she slumps to the side.

So that's what we did and when it was over, I calmly rolled Sophie's chair into the house and lay her down on the couch in the dimly lit living room. My friend followed me inside after a few minutes and murmured comforting things to Sophie and stroked her hair back from her forehead. And then she looked at me with tears in her eyes and I knew that it was tough for her. That it's horrible to see a seizure and very upsetting. I think she said something about how amazing I am as a mother, something that I brush off because really, it's what I do, what I've done, what I'll continue to do until God knows when.

But what my friend didn't realize is that I am grateful less for those words than for her witness. I am grateful that what she saw made her cry a bit, and as silly as it sounds, that those tears affirmed just how difficult it all is for Sophie, for the boys, for my husband, for me.

It's a kind of release to have a witness, someone who knows in some small way what it's like to watch helplessly as a seizure occurs. And then to realize that this is what we do, every day and sometimes multiple times a day, year upon year. I feel, then, that I don't need to reassure this person that it's not that bad because they've witnessed that it is. I feel, too, that they know, on some level, that while she may look good, there is This, too.
Posted by Elizabeth at 8:34 PM