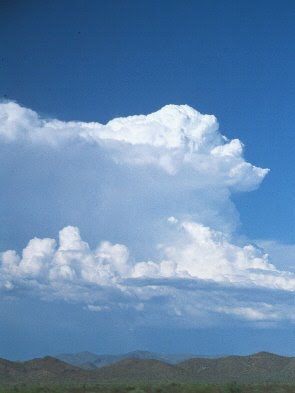 
Early last week, I had a visceral need for rain. And since I live in Los Angeles where we're lucky to get even 14 inches of rain IN A YEAR and we're now into June which basically means no rain until November, it was really only a wish. I just felt this bodily urge for water, the gentle, falling kind and the smell of it afterward and the clearness of the air. I needed to feel clean. New. Fresh. But it was just a passing thought, one that I noted because of its strength and unusualness (I ordinarily hate rain -- it makes me feel profoundly depressed and the lack of it is one of the main reasons that I love Los Angeles).

On Saturday morning I left with Sophie for Flagstaff, Arizona to visit the famous homeopath who helped us four years ago when Sophie went through a terrible decline. I had a lot banking on this trip after the failed medication trial and Sophie's persistent seizures. The trip there went well in that Sophie didn't have a single seizure right up to and through the flight. She walked up the stairs of the small plane we took and down the aisle. She even side-stepped into her window seat and sat quietly for much of the trip with her head on my shoulder, dozing.

The ease of the day seemed propitious to me. We hit some very turbulent air on the way, probably the most bumpy that I'd ever experienced and when the pilot came on to tell us that we wouldn't have beverage service because of the rough air, I started to feel nervous. We were just experiencing what he called the MONSOON season.

MONSOON???? Don't those only happen in places like Bangladesh or India? We were flying over the desert, I thought. But when the woman across the aisle told me that this was usual on this flight, I relaxed and even thought it felt like we were on some kind of ship, bobbing in the waves.

It was when we landed, though, that I realized IT WAS RAINING.

A warm, gentle rain that I turned my face up to right there on the airport tarmac as I helped Sophie into her stroller and walked into the airport. And when the rainbow rasta-hatted young man with hiking boots handed me the keys to my rental, he said in a gentle voice, "I'm giving you a Nissan Sentra," like it was the greatest thing in the world and it kind of was because it was still raining as I drove away.

I'm believing, is what I thought.
Posted by Elizabeth at 9:04 PM