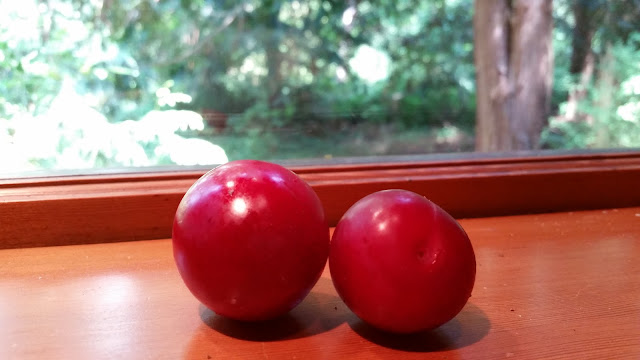 to Nicole, Diane and Rosie

I was going to post about plums, and it was going to be a sensuous if not sexy post, but there's been an interruption. The title to this post should read:

Here's what just happened. The other day, when I went for that walk to Useless Bay at low tide, I picked up the most amazing conch shell. It was perfectly intact. It was fist-sized, ya'll! Like something you would buy in a shell shop all polished, but the real thing. It was white. It was lying there, waiting to be picked up. I picked it up. Earlier I had picked up an amazing sand dollar and promptly dropped it because it just felt -- well -- wrong (in the sense that Oliver used the word when I told him how babies were made when he was a little boy and he asked me whether that was what I had done with his father). What can I tell you? I'm a city girl. But the conch shell was dry, and when I shook it, it made a rattling sound so I thought the owner had probably dried up. I took it back to Willow cottage and put it on the bench outside the front door because it smelled a little, and  -- you know.

Anyhoo. (New readers -- I hate this word and only use it judiciously)

I just now brought the conch shell inside and began to wash it out in the pretty little blue basin that is my cottage bathroom sink. I shook it pretty vigorously to get that sand out, but what slid out was a giant, gelatinous blob of I don't know what, right into the sink, and the memory of it is making me gag even now as I type these words.

This gelatinous, moist thing slid out with a sucking sound.


I texted my best friend who gave me some advice: 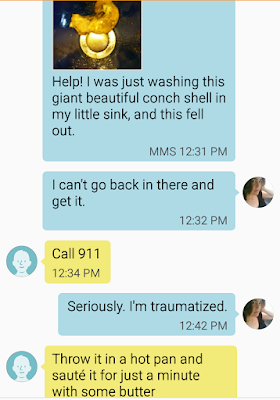 I managed to get a big wad of paper towels and a plastic bag at the ready, scooped it up (still gagging and this girl is NOT a gagger) and threw it in there.

Now I don't know what to do with myself. I'm going to blame this on the three writers who left this morning. They've takenall the magic out of Hedgebrook, and I'm left with a slurping gelatinous mass to haunt my dreams.

Where ARE YOU, Nicole, Diane and Rosie? You, especially, Rosie! I know you would have taken care of this godforsaken thing in my wash basin or at the every least delegated the job to someone!

I don't want to use the word traumatized because that would be hyperbole, and I'm supposed to be honing my writing here. I'm a teensy tinesy bit inclined to pack my bags and head out of the woods, though, take the first ferry back to the big shitty.

Posted by Elizabeth at 1:18 PM