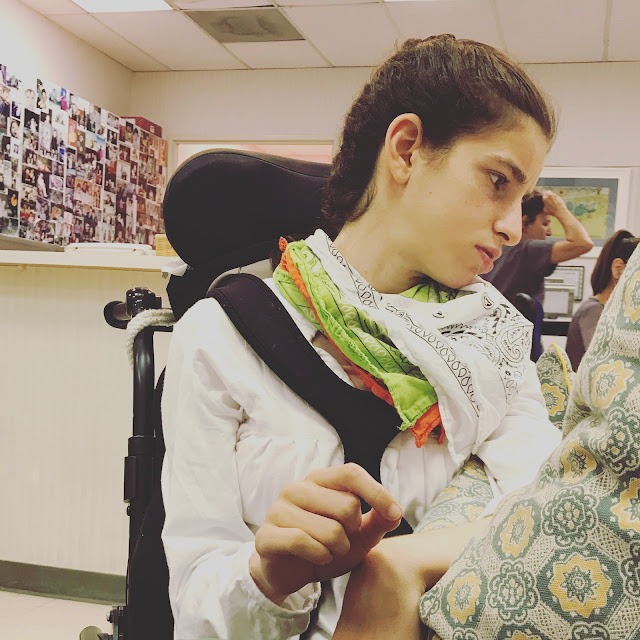 The New Neurologist was great.* He spent nearly an hour with us, listening. He very much wanted to help us. He called us veterans. I watched him observe Sophie throughout, and even though he doesn't know her, I think he got her. I feel a new resolve to get to the bottom of things and figure out what might be causing these weird symptoms. The New Neurologist was pleased that the CBD is helping Sophie's seizures and puzzled over her deterioration. He might have some ideas. He seemed intellectually curious and kind. The New Neurologist wants to rule out some things and has ordered an MRI, a lumbar puncture and some blood tests. As loathe as I am to do tests, we haven't in more than a decade, so I'm putting aside my partially justified and partially insane doubts about the profession and letting go. Plus, he gave me his cell number on a sticky note and said he was available at any time if I needed anything. When I type that out, I feel a bit of a thrill at the words -- a sort of pick-up line for a mother starved for attention for her declining daughter. Gallows humor. My parents are helping me to purchase a bath lift system for our bathroom so that we don't continue the dangerous clusterf*^k that is bathing Sophie. This sort of thing is a kind of acceptance and it is difficult to do, and I think you know why. Acquiescence.

Is there a difference between acceptance and resignation? Between surrender and acquiesce? We're all good here with words. You tell me.

Because Even the Word Obstacle is an Obstacle

Try to love everything that gets in your way:
The Chinese women in flowered bathing caps
murmuring together in Mandarin doing leg
exercises in your lane
while you execute thirty-six furious laps,
one for every item on your to-do list.
The heavy-bellied man who goes thrashing
through the water
like a horse with a harpoon stuck in its side and
whose breathless tsunamis rock you from your
course.
Teachers all. Learn to be small
and swim past obstacles like a minnow,
without grudges or memory. Dart
toward your goal, sperm to egg. Thinking,
Obstacle,
is another obstacle. Try to love the teenage girl
lounging against the ladder, showing off her new
tattoo:
Cette vie est la mienne, This life is mine,
in thick blue-black letters on her ivory instep.
Be glad she'll have that to look at the rest of her
life, and keep going. Swim by an uncle
in the lane next to yours who is teaching his
nephew
how to hold his breath underwater,
even though kids aren't supposed
to be in the pool at this hour. Someday,
years from now, this boy
who is kicking and flailing in the exact place
you want to touch and turn
may be a young man at a wedding on a boat,
raising his champagne glass in a toast
when a huge wave hits, washing everyone
overboard.
He'll come up coughing and spitting like he is
now,
but he'll come up like a cork,
alive. So your moment
of impatience must bow in service to the larger
story,
because if something is in your way, it is
going your way, the way
of all beings: toward darkness, toward light.


*For those who missed it, The Old Neurologist we've used for nearly four years lied to me about why she didn't want to discuss medical cannabis and Onfi interaction when Sophie was hospitalized two weeks ago. She claimed that she had received direct orders from her boss that she wasn't to discuss medical cannabis. It turned out that there was no such policy (at least officially, and I wouldn't be surprised if Pressure From Above was happening), and that she just didn't want to discuss medical cannabis with us. I don't trust The Neurologist now and certainly can't leave my daughter's care to her. When the profession's only use and power for your child over 22 years has been to write prescriptions for lethal and ultimately useless drugs, however well-intended, if you lie to me, I can't do it. I understand fear, and I've tolerated that. Transparency and good communication is as important as intellectual curiosity, and if you don't have either, I can't do it.
Posted by Elizabeth at 9:38 AM