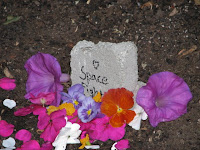 So, after writing about some beautiful poetry in my last blog, I have a more mundane story to tell. Our beta fish, Spacefight Lemonade Cool Shark (yes, that was his name) died the other day after many, many years on the planet. Literally. He was over five years old, closer to six, we think. He lived for most of those years in a faux space capsule tank that had a plastic rocket and a moonscape inside. Spacefight was blue with a tinge of red on his fin and he swam round in circles all those years despite an often filthy environment and minimal food.

My sons Henry and Oliver only changed the water in his bowl when I begged them to, and even then it was an ordeal. Both wanted to do the actual catching of the fish in the green net but neither wanted to clean out the stinky bowl. As I was saying, though, we found Spacefight floating the other afternoon, so I gave the boys a choice to either flush or bury him. They chose a funeral and for about a half an hour or so, I heard them going into and out of the house. They dug a small hole in the back of the garden, dumped Spacefight in with the technicolor green rocks that lay at the bottom of the bowl and then topped him off with some dirt and a good-sized rock that had his name written in Sharpie on the top.

Oliver threw some flower petals on the grave and they somberly stood over it. They were both weeping, and when I put my arms around each of their thin shoulders, they leaned into me, their heads sweaty against my bare arms. Henry, who will be ten years old next month, cried into my shoulder, "We said a few prayers for him, Mom, and then Oliver and I remembered the good times we had with him."

I tried not to smile and asked, "What sort of good times did you remember?"

"You know, when we'd change the water and then Spacefight would swim around so happy in his clean water," Henry sobbed. Oliver who is seven and the fiercer of the two didn't have anything to say. He just wept and I patted their backs and thought how ironic it was that they were so moved and touched to cry like that at a fish's death. Here they live with a sister who though older than they can't talk or do anything with them other than watch their antics; they've witnessed hundreds if not thousands of her seizures, yet for the boys, I'm not sure her life is the tragedy that was the fish's death.
Posted by Elizabeth at 10:39 PM