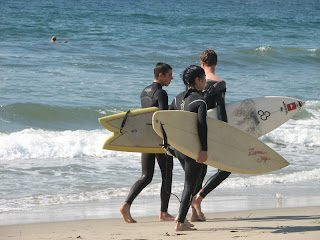 I dropped my two boys off this morning in Manhattan Beach for another day of Surf Camp. The sky was gray at 9am and the water blue, but their faces were radiant when they ran from me toward the beach, their thin bodies encased in equally thin rash guard shirts and flowered swim trunks. I decided to stay a little and watch, hanging over the rail at the parking lot, the stream of surfers and joggers and dog walkers. After a half an hour or so, the sun had come out and glinted off the water. The surfers were black bobbing knife edges in the blue and my boys were sitting in the sand with the other campers. They were meditating and doing some yoga, one of the reasons that I'd enthusiastically signed them up for the camp. When I told my father that the boys were going off to surf camp this week he said, "Great, they'll grow up and have long hair and do nothing." I didn't tell him about the meditation.

The truth is that I'm about as East Coast as you can get. I love urban life -- the food, the movies, the black clothes, the grittiness of it all. I never loved a place more than New York City when I lived there through the 90s. I'm not an athlete and have never had the remotest interest in sports. That was until we moved out to Los Angeles and I became if not obsessed than certainly acutely interested in surfers and surfing. I am a bookworm and a self-confessed literary snob and have never played any sports, but if I could have another life, this is what it would be. I'd not think about much at all and if I did, it'd be about the waves and the morning and the feel of the water and where I was in it. I'd wear a bikini and put on my wetsuit right by my Volkswagon van. I'd walk down to the ocean with my board and then I'd just paddle out and wait for the perfect wave.

I haven't done any of it yet, though, and fancy some sort of girls' surfing party when I turn forty-five this year. In the meantime, it's not without envy that I stand here and watch the rituals of the morning surfers at the 45th Street lifeguard tower. There's an impossibly good-looking young guy waxing his board to my right and an old man with a wrinkled, sagging wetsuit walks by me, board on his shoulder. The man next to me at the rail just got a hip replacement and has a head of shockingly white hair, but he's complaining that he can't surf for another month. I'm a middle-aged woman with plum-colored Wayfarers, watching her two boys grow up in the southern California sun. Who knows -- growing up with long hair and doing nothing might not be too bad after all.
Posted by Elizabeth at 9:01 PM