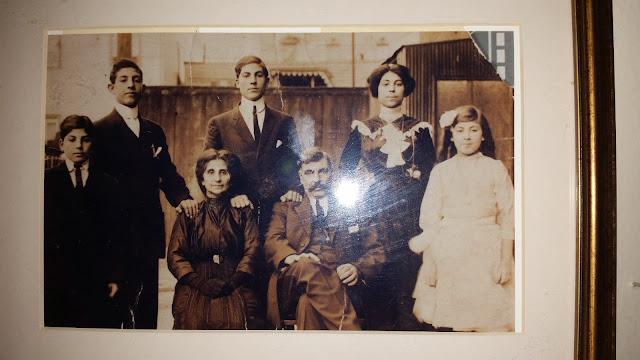 Those are my Syrian relatives who immigrated from Homs in the early part of the twentieth century. My grandfather is the second from the left, one hand on his mother's shoulder. Grandpa was a tough guy, smoked packs and packs of cigarettes, cursed in Arabic and called me Rosalita because I looked more Italian than Syrian.

I think about my Syrian relatives whenever I read about the chaos and tragedy of Syria. I imagine people with the same blood as mine are running through the streets or away. Like everyone, I am struck dumb by the constant stream of photos of the millions of desperate refugees, particularly the one of the little boy, face-down in the sand at the water's edge. What do we do in the face of such madness? What do we even think? I can't look away. I can't not think about it. I wish that I could do something about it.

I don't believe in borders, in walls and nations, to tell you the truth. I feel no pride as an American, but rather fortunate, lucky to be here and not Syria. Lucky, not proud. I admire the actions of Germany and Iceland who have announced programs to take these refugees. I wish that I could offer my home to a refugee, but how do I do that? How do we do that? I live in America where the ruling class can't figure out a proper immigration policy, where a leading candidate for president wants to build a giant wall at the border to keep people out, where people complain about illegals getting an education or a driver's license or food stamps. I'm an American and complicit. I'm also Syrian, and I want to do something.