All Italics Are Da Vinci's Except For That Moon 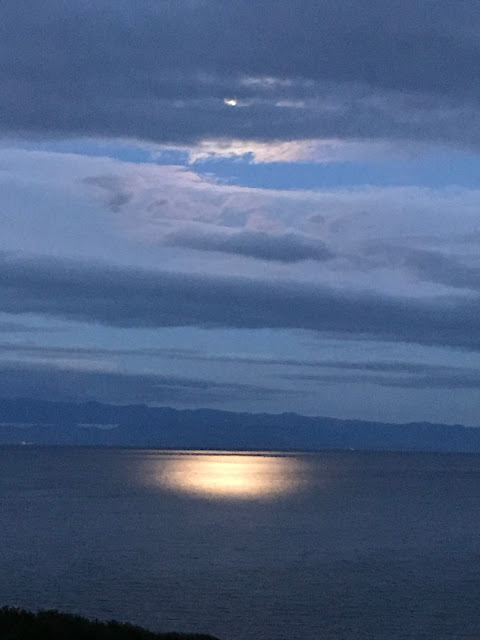 I say that the blue which is seen in the atmosphere is not its own colour but is caused by warm humidity evaporated in minute and imperceptible atoms on which the solar rays fall rendering them luminous against the immense darkness of the region of fire that forms a covering above them.


What happens when everything you see and touch and hear and smell and feel comes to you as in the fulfillment of a dream?

Writing about the kite seems to be my destiny since among the first recollections of my infancy it seemed to me that as I was in my cradle a kite came to me and opened my mouth with its tail and struck me several times with its tail inside my lips. (a dream of Da Vinci's infancy)


The room at the top of the stairs where I learned to rest four years ago, the woman who cared for me like a mother, the courage to send in my writing, the awarding of three weeks in a cottage in the woods in the same part of the world the next year, a great upheaval that led to a bird photographer, an owl, a whale's fluke (like a whirling wind scouring through a sandy and hollow valley which with speeding course drives into its vortex everything that opposes its furious course....), a white bed in the same part of the world four years later and then this: waking at four, always four and a beam of moonlight shining in the only strip of window not covered by curtain. Shining on the blue sea, blue moonlight. I'll get the moon for you, he had said, and he pulled the curtains to there right before love (touch), and then sleep, and waking at four, always four and there it was, and you (I) stood there in a black nightgown bathed in blue.

To me it seems that all sciences are vain and full of errors that are not born of Experience, mother of all certainty, and that are not tested by Experience; that is to say, that do not at their origin, middle or end, pass through any of the five senses. For if we are doubtful about the certainty of things that pass through the senses how much more should we question the many things against which these senses rebel, such as the nature of god and the soul and the like, about which there are endless disputes and controversies.

There's a little blue book by the side of the bed of the woman who cared for me like a mother, a little book of selections from the notebooks of Leonardo da Vinci, and I open it to Flight, to Structure of Birds' Wings, to You will study the anatomy of the wings of a bird together with the muscles of the breast which are the movers of these wings. And you do the same for man in order to show the possibility that there is in man to sustain himself amid the air by the flapping of wings. And what are the chances of this, of reading of birds and whales and blue and flight written in the 16th century?

Impetus is the impression of local movement transmitted from the mover to the movable thing and maintained by the air or by the water as they move in order to prevent the vacuum. (Movement Through Wind and Water)

Posted by Elizabeth at 6:52 PM