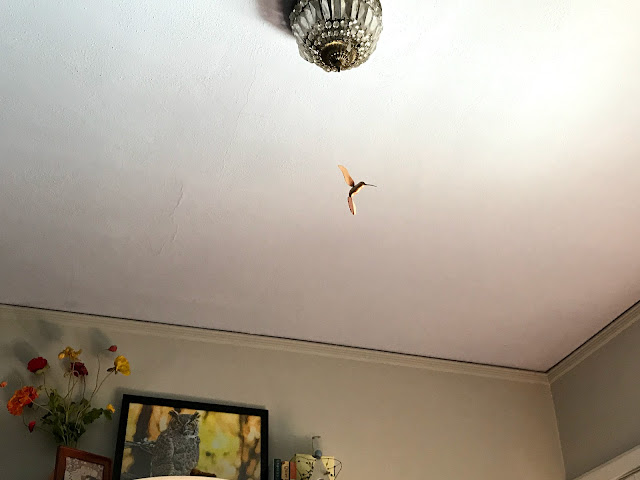 The Bird Photographer brought that tiny carved hummingbird back from Costa Rica recently and gave it to me, so I hung it above my bed. Honestly? My favorite thing to do is lie on my back on my bed and while away the minutes, do absolutely nothing but stare at the ceiling and watch the late afternoon light play across the walls, and now the hummingbird who drifts a bit, rotates round. That and reading.

I've been exercising these days. I've been going to a dance class called Kardio Krunk. Don't laugh. Or, rather, laugh all you want. The class is taught by this beautiful man who is also working with me one on one as a personal trainer once a week. I bought myself five sessions with all that money I got back from the POSPOTUS' tax reform. I had my first full blown anxiety attack when I went for my initial assessment. I'd love to regale you with the details, but suffice it to say that at one point I was curled into the fetal position on the floor of the beautiful man's studio with an ice pack under my chin. It wasn't the assessment that did it to me -- I swear I'm not that pathetic and out of shape. It was this weird feeling that literally overtook me. One moment I was lifting weights up over my head and the next my entire shitty life was passing through me, and I mean shitty. I had in a sort of simultaneous rush just about every superficial thought you can imagine -- from how fat and ugly and out of shape I was, how insurmountable the goal of losing weight and being fit to how unfair it was to be a caregiver of a child with disabilities for more than two decades and still not have shapely arms.  There was some divorce in there, too, and the state of my stomach, and seizures, of course, and just all of it. Cue: laughter. The Kardio Krunk guy was very patient and very calm as I went through this, and while I didn't voice anything but moans and I swear to god I've never had an anxiety attack before!, I actually cried, and he assured me that he'd seen it plenty of times before. I found this hard to believe, given that it's Los Angeles, but he was nice to say so. He believed my sudden swoon to be a surge of adrenaline and endorphins, coupled with an anxiety attack. Aside from the few moments on the floor when I didn't care if I died or not, given how bad I felt, I was more curious than embarrassed to be so betrayed by both my body and mind. They honestly worked together that afternoon in spectacular concert which is actually pretty cool if you think about it.

Since then, I've been back to see him a couple of times, and I'm doing better. I've taken two Kardio Krunk classes where I attempt to keep up with the class doing intricate dance moves, including twerking, as very very loud hip hop music plays, all while avoiding looking at myself in the giant mirror that runs the length of the studio. If I so much as glance up at myself, I lose my count or the step or the beat or the twerk and want to just lie down on the floor and give it all up to the lord.

When I get home, I lie on my back on my bed and stare at the ceiling, my mind drifting with the tiny wooden hummingbird floating above me. My face is red and my legs are quivery. I can hardly unbend my arms, but I don't feel miserable. I feel exhilarated, like I'm already fit and light, like my life is endless and there's still time.
Posted by Elizabeth at 10:39 PM