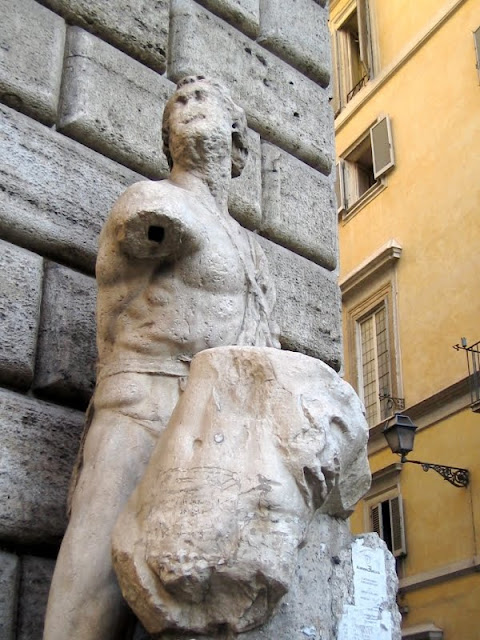 My father recently sent me the link to a website that described one of Rome's famous "talking" statues, Pasquino the Protester. Evidently, a pasquinata is an anonymous lampoon, usually written in verse, and hearkens back to the Roman tradition of citizen dissent. According to Italian Notebook, Roman tradition dictates that the oppressed may lodge a written complaint concerning the government and religious authorities by posting an accusatory poem in Roman dialect on the base of the statue. The base of the statue looks like this (evidently, post-it notes were in circulation during the 1500s): 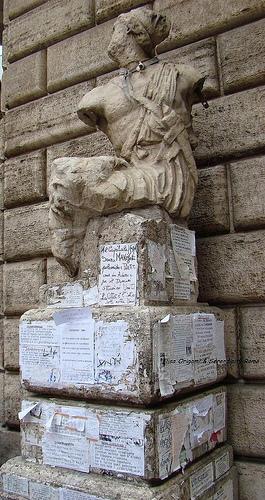 My father and I often have heated discussions about politics and religion and life in general. He is conservative but moderately so and almost never judgmental. He abhors the ugliness of partisan politics and rarely enters that fray, while I have inherited a bit more of my mother's fiery opinionated character (although my views are literally the exact opposite). I know that my liberal streak can be an affront to both parents and there have been times when we literally speak of nothing at all that pertains to politics because it's just best that way. When my younger sister married a man whose work colleague was no other than William Bennett, the insufferable Washington conservative blow hard (since this is my blog, I get to say what I want -- ahem), I got into quite a "discussion" with him at the rehearsal dinner. At the wedding the next day, my father told me that if I kept my mouth shut, he would pay me $1,000.  My father reads my blog regularly and almost never comments. He has told me that he sometimes cries when he reads it, sometimes laughs and sometimes gets angry. I'm sure the anger is when I go off on a political rant, so when he sent me the email with the information about Pasquino the Protester, he wrote:

Do you think we're related to him?

I'm thinking we are, and somewhere along the way we lost the p and the s in the name, so that I, Elizabeth Aquino, instead of being incorrigibly argumentative and sharp-tongued, am, in fact, part of a long line of Roman protesters.