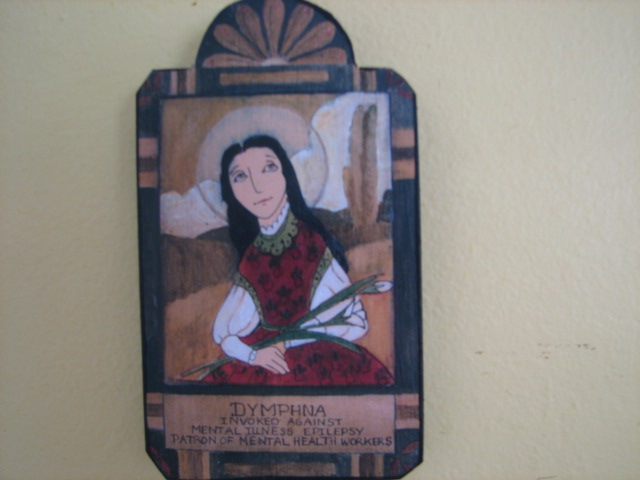 I found this folk plaque in the Albuquerque airport on my way home the other day. I always understood that Valentine was the patron saint of epilepsy and had never heard of Dymphna, but she actually looks a bit like Sophie, and I was thrilled to spend way too much money for a cheap, hand-painted piece of wood.

Here is St. Dymphna's story, as depicted on the back of the plaque. It's interesting to see how epilepsy and mental health are linked together. This is an old fallacy, perhaps perpetuated by me buying it and hanging it on a wall.

I do love a talisman, though.


Dymphna fled Ireland with Father Gerebran, an old and holy priest and her father's court jester and his wife in the sixth century. Her father, in his grief at the death of his wife, demanded that Dymphna fulfill her mother's role as his wife. Her father eventually found her in a hut in Geel, Belgium where he demanded that she meet his perverted demands. She refused, whereupon her father slew her with his sword. At her gravesight miraculous cures of the mentally ill and epileptics have taken place. One of the world's largest and most progressive hospitals for the mentally ill is built on the site of her martydom.
Posted by Elizabeth at 12:18 PM