Something I grapple with 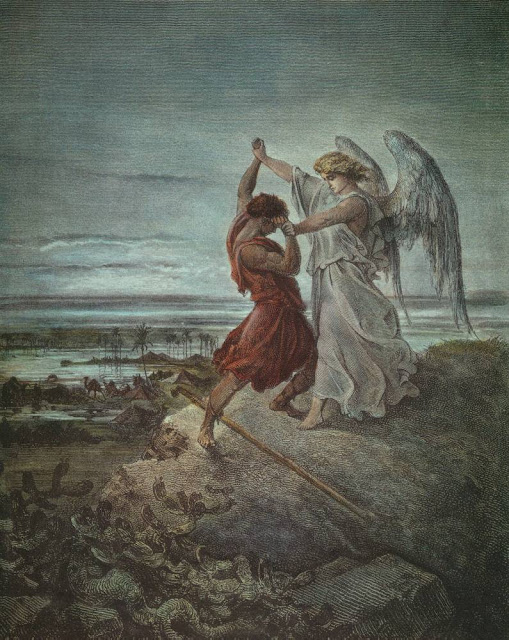 The same night he arose and took his two wives, his two maids, and his eleven children, and crossed the ford of the Jabbok. He took them and sent them across the stream, and likewise everything that he had. And Jacob was left alone; and a man wrestled with him until the breaking of the day. When the man saw that he did not prevail against Jacob, he touched the hollow of his thigh; and Jacob's thigh was put out of joint as he wrestled with him. Then he said, "Let me go, for the day is breaking." But Jacob said, "I will not let you go, unless you bless me." And he said to him, "What is your name?" And he said, "Jacob." Then he said, "Your name shall no more be called Jacob, but Israel, for you have striven with God and with men, and have prevailed." Then Jacob asked him, "Tell me, I pray, your name." But he said, "Why is it that you ask my name?" And there he blessed him. Genesis:32

I went on a walk the other day with one of my closest friends and at some point during the walk and the talk of husbands and children and life and movies and books and weight and exercise and Sophie, I said something to the effect of how Sophie's life had lifted and enriched mine in ways that I couldn't always articulate. I think I said something like I'm not sure what sort of woman I'd have turned out to be if I hadn't had Sophie and, specifically, the troubles (a phrase I'm especially fond of with all its understatement -- I believe it's how the Irish referred to the Catholic/Protestant issue so I usually say it with a faux Irish accent). I'll say right now that I'm plenty aware of the grappling with identity that comes with motherhood. I've got three children, two who are as typical as can be. But this is a different sort of grappling, a different sort of identity thing that is probably best understood by those who've experienced it or something similar. And what I meant by that is NOT that Sophie's life, her seizure disorder, the fact of her existence has meaning only in and of itself -- that she was sent here by God for a specific purpose and that I have successfully figured that out. I don't believe that Sophie's seizure disorder has any meaning whatsoever. I think bad things happen, all the time, to most people. I don't believe Sophie's life's purpose is to show me or any of my friends or family anything at all.

I believe in the randomness of fate.

I do believe her life has purpose but that purpose is her own.

This is what I grapple with (and please allow me to be presumptuous enough to compare myself to Jacob wrestling the Angel Michael or God or whomever).

Jacob was alone, in the dark, wrestling with God. That's a pretty damn intimate thing to do, to wrestle with one's spirituality, in the dark. and to come out blessed.