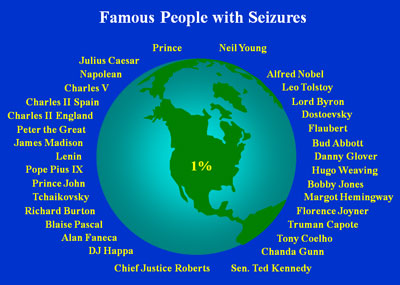 I write about my daughter's epilepsy a lot, and most of that writing is very personal. Sometimes people email me with specific questions, and I realize that there is very little on this blog that is educational in the specifics of epilepsy. I might have posted once, a long time ago, what you should do if you see someone have a seizure (and I can't find that post), but I don't think I've given many statistics. So this post will be useful, I hope, and a bit dry, but I'll probably manage to put in a few personal bombshells. I hope it's a little shocking.

Here are some statistics:

1% of the general population has epilepsy. That's a heck of a lot of people, no?  You can have a seizure and develop epilepsy at any time in your life. Epilepsy is more common than parkinson's disease, multiple sclerosis and cerebral palsy, combined. That doesn't mean very much, and it certainly doesn't take away the seriousness and tragedy of those other diseases, but a point should be made that the research money allocated toward epilepsy is woefully below that of other, far less common illnesses that affect far fewer people.


Of that 1%, about 70% have good control of their seizures through medication, surgery and/or lifestyle changes including diet.


Over 30% of people with epilepsy struggle to control their epilepsy and are resistant to current medications. That's the population that my Sophie is within and her epilepsy has been refractory to eighteen drugs and the ketogenic diet. She is NOT a candidate for surgery. In fact, infantile spasms, the rare form of epilepsy that Sophie was diagnosed with at three months of age, is still treated in much the same way as it was fifteen years ago. Despite a few new drug advancements for the disorder, the outcome remains quite bleak. That's depressing and frustrating.


In the almost fifteen years since Sophie was diagnosed we have seen amazing technological developments in our world:


For the past fifteen years, children diagnosed with infantile spasms are treated in relatively the same way as Sophie was -- unsuccessfully. I speak, at least once a month, to parents of children with either newly diagnosed seizure disorders or who have had uncontrolled epilepsy for years. Many of these children are on multiple drugs and are still seizing.

I find this unethical. We have chosen NOT to continue to drug Sophie when those drugs don't work. This is not acceptable to many doctors and to many parents. Fortunately, Sophie doesn't have the type seizure that goes on for "too long," (the type seizure that can cause severe brain damage and death). We have had to balance the two evils: seizures and side effects. We have often chosen seizures.


Epilepsy in America is as common as breast cancer and kills as many people. I'll type this very, very small because I can be very, very superstitious, but SUDEP (sudden unexplained death in epilepsy patients) is more common in patients whose seizures are not controlled and who are on more than one medication to control those seizures.

Do I sound frustrated? I am.

I work part time with an organization that strives to improve the quality of and access to healthcare for children with special needs, and children with epilepsy are one of our main concerns. These children and their families are legion, and the disease has been neglected for too many years, probably due to stigma and its often grim prognosis. The work this organization does is noble and much progress is being made.

I am also on the board of the Epilepsy Foundation of Greater Los Angeles, and our chapter is doing a lot to improve the quality of life of those who live with epilepsy and their families.

More must be done, though, and awareness is where it all starts.
Posted by Elizabeth at 12:17 AM