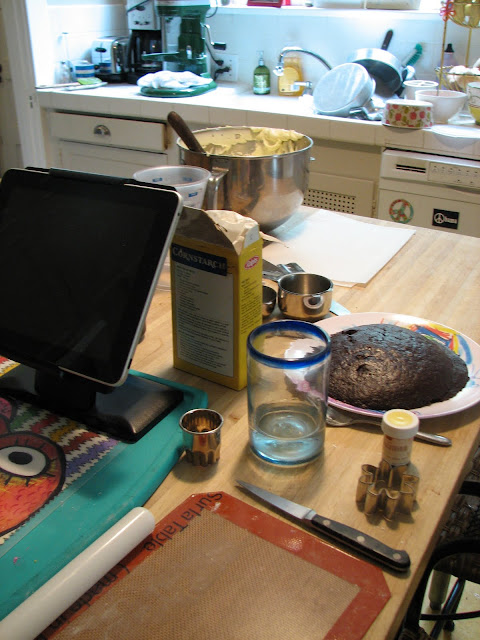 I made two cakes today, a lemon cake with lemon frosting and tiny little squares of candied lemon peel on top. Just before the customer came to pick it up, I opened the box to check on it and saw three splits on the top and even though I don't gasp, I exclaimed and lifted it carefully out of the box and proceeded to patch it, shaking my head, wondering what had happened because except for the time I forgot the sugar in a cake long ago and it came out like a pancake and the other time when I grabbed the box of baking soda instead of baking powder and tasted its tinny witness only hours later (blaming Trader Joe's and their packaging, making the soda look like powder in a round container instead of a square), I have made few mistakes in the cake itself. Patched, it looked fine and I sent it on its way. While the frosting for the second cake was whirring in the bowl -- ten minutes and sometimes twenty -- I opened The New Yorker and began to read Kate Walbert's (a writer whom I met in NYC several years ago when I had actual lunch with her and some friends at my dear friend Jane's house, and I was in awe of her presence as I always am, writers my heroes and especially this one) new short story M&M World, so good that I stood, reading it as if I were on a subway, the whirring in my ears, instead of a roar, I stopped the machine and dipped a finger in, licked the sweet to check and then turned a page.
Posted by Elizabeth at 4:34 PM