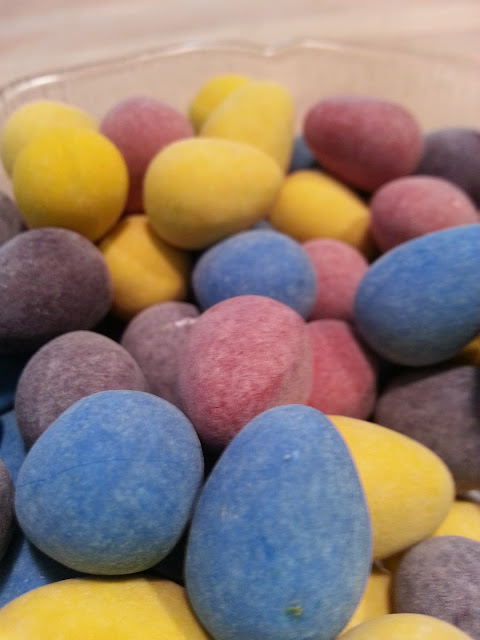 I bought these Cadbury candy-coated dark chocolate eggs today at Target and never imagined the colors would look like this. Good Lord! They're beautiful! I put them in a glass dish that belonged to my Mississippi grandmother, Ida Mae. My good friend D has been bugging me to tell more stories, to "anchor myself in my family," so I'll leave you with that tantalizing bit of family lore. Good Lord.

Oliver disappeared into the bathroom after school, and since we live in a tiny bungalow, I heard him talking from my bedroom where I stood folding laundry. I couldn't make out what he was saying, but he appeared animated, and I know he wasn't on the phone (he doesn't yet have one).  I called out, What are you doing? He yelled back, I'm in the bathroom! I heard some more conversation, so I said Who are you talking to? He yelled back something something, so I put down the five millionth pair of white socks, walked out into the hallway and said through the closed door, Who are you talking to?

Good Lord, I thought and walked back to fold the rest of the laundry.

**As the wise Ms. Moon pointed out in the comments, if he doesn't have a phone, how was Oliver speaking with Siri? Well, Reader, Oliver is not insane. He actually has an iPod Touch 5 which apparently does have Siri. Good Lord.
Posted by Elizabeth at 5:08 PM