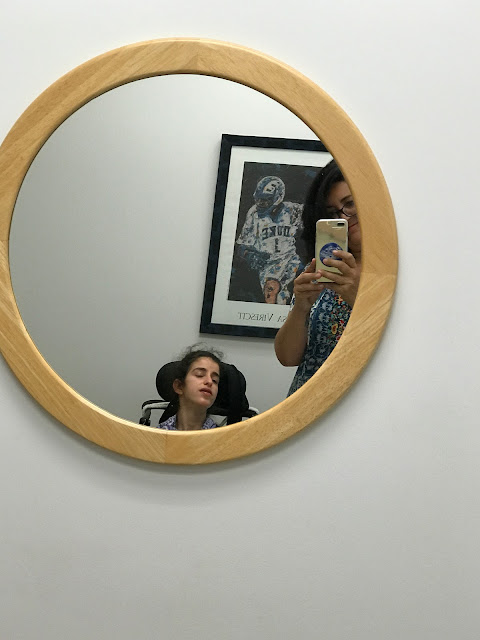 I think Sophie's name and persona is being used for MediCal fraud. This weekend I got a stack of papers, including 5 Explanation of Benefits for services rendered three years ago on arbitrary dates for arbitrary amounts of money. The provider is The Department of Children's Services. The insurer is HealthNet. The dates were all in the fall of 2014, and we did not go to a doctor on any of them. We've never used HealthNet, although straight MediCal might have once. The Explanations of Benefits came in a big packet, each one followed by the exact same sequence of nine pages with language translation information and my "rights." That was 45 pieces of paper in the envelope, only 5 of which were the actual business at hand. Bear with me.

Because it was Friday, and because I am disruptive, I decided to call the number on the sheets of paper and ask what the hell was going on. I spoke to four different persons in nearly two hours -- let's say their names were Rhonda, Wanda, Larry and Jill. Rhonda was the quickest to bump me off to Wanda who was the type of service professional you can imagine staring at a Service Manual and reading the script best suited for Disruptive Women. Whenever I said "thank you, Wanda," or "Ok, Wanda," she said, "No! Thank YOU!" and we might have gone back and forth for hours with pleasantries if I weren't so disruptive. I won't even tell you how apologetic she was every time she put me on hold and popping back in periodically to make sure that I was all right. In the end, Wanda sent me to Larry who -- quite literally -- FREAKED OUT. When I explained my "problem" to him for the second time (the first time, he kept insisting that he was trying to help me but kept asking me really stupid questions, so I admit to being impatient), in my most disruptive voice, he said, "Whoa, whoa, whoa. That sounds like something really big. Really big." Larry was undone and advised me to call the Ombudsman. He said Ombudsman in a tone of voice that conveyed the mystery of The Wizard of Oz and then, very, very solicitously spelled it out for me. Because I'm disruptive (and perhaps a teensy tinesy bit stressed), I actually interrupted him at that point and said, Larry, I KNOW what an Ombudsman is and how to spell it thank you very much. Larry and I said our good-byes, and at  approximately 4:54 pm, I called the number Larry gave to me and spoke to Jill who got a gold star for even picking up the phone so close to closing time and then after the first explanation sighed and said that I would have to call the fraud department of MediCal on Monday morning.

Are you still reading?

I put my finger to my temple and did a Rodin pose and then recalled a similar stack of papers that I received earlier in the year or maybe last year with a whole lot of weird amounts of money paid out. There was one in there from 1999, when Sophie wasn't even a recipient of MediCal, so I called then and reported "fraud" and maybe even wrote a post on the old blog about it. Because I'm a disruptive woman in healthcare and mighty efficient, I pulled out that stack of papers and found my notes. Needless to say there has been no follow-up, and now I'm facing a Monday morning call to the Fraud Department.

The most disruptive thing I'm thinking at this point is who would want Sophie's medical identity, anyway? What would be great is if we could just switch with someone healthy milking the system and really go to town on the amazing benefits.
Posted by Elizabeth at 9:28 PM