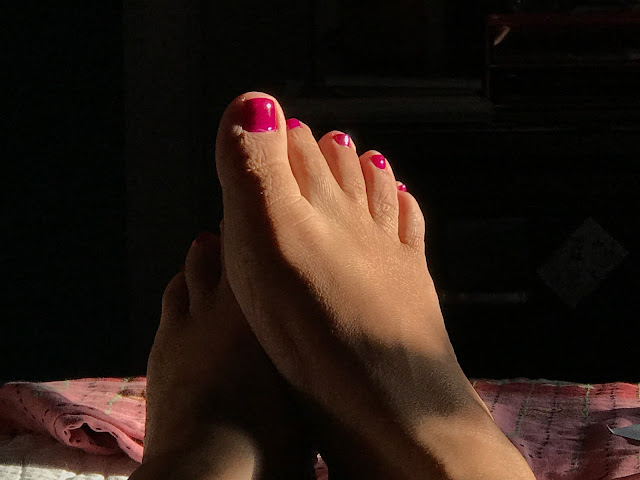 I had my toenails painted this afternoon despite the hurricanes whipping up over the Atlantic again, despite the persons displaced by the last hurricanes still digging themselves out of the muck, despite the huge earthquake that hit Mexico City this morning and killed hundreds of people, despite the Rocket Man speech that the Sexual Predator in Chief of the Disunited States gave to the United Nations, despite the threat of nuclear annihilation, despite the displaced millions in Syria, despite the melting ice-caps, despite the half million Rohingya refugees from Myanmar spilling into Bangladesh -- well -- you get it. I have nothing to bemoan or to complain of, other than 22 years of watching my child seize and suffer and the burdens of caregiving, and even those are nothing, nothing in comparison.  Are we connected to one another in suffering? I sat in the raised chair while a woman I don't know knelt at my feet and painted my toes a brilliant purplish pink. I go to Sophie's room every single morning expecting her to have perhaps died, and I realize that sounds dramatic and perhaps neurotic, except it's not. The thing is, we do that. We put our children to bed at night like newborns except we do it for years and years and years, sometimes decades, and we hope they don't die before us and dread that we might die before them. What's it all about? my seven year old son cried one afternoon, watching his sister seize and his mother weep. This isn't a post about privilege, however aware I am of it. I'm just musing on what it means to know suffering, how the demands of caregiving as mother, the detail of it, the tedium of it, the relentless ongoingness of it,  has honed me, made me aware of the more giant undertone that is the suffering of the world. How I can't do anything about it and do everything about it, every single day.
Posted by Elizabeth at 6:18 PM