I wasn't going to say anything until it was a done deal, but it's a done deal for the most part and Sophie has finally started her day program in Santa Monica.

Sophie "graduated" from the LAUSD over a year and a half ago. She's been on a waiting list for years for this place, got a place and then we basically had to wait a million years for the right aide and the right paperwork and the right funding and you know the drill. Sophie has been at home with me and Saint Mirtha for all this time, and I can tell you that I'm a really boring mother at this point and an even more boring entertainer/cruise director/activities coordinator. I'm not lying. I am as burnt out as they come, and I'm making no apologies for that. Catholic girls have enough guilt flying around their parts to cover it, and while I've sworn off the Catholic church, I can't swear off the guilt. Saint Mirtha's got some chops in all those fields, but Sophie has basically been hanging around us or a bunch of toddlers and babies and nannies at the neighborhood park. Nothing wrong with that, actually, as Sophie is very interested in babies, and I've fantasized about her taking on a second job (when she gets off her Uber shift) as a baby whisperer.

But this day program is the bomb. It's community-based, so the young men and women go out everyday into the community and do stuff. If they're able, they work, go to the YMCA and work out or learn a trade. If they're like Sophie, they go to museums, the park, the beach, have music therapy, learn self-help skills, learn how to better communicate their needs and -- well -- make friendships and enjoy their lives.


The drive to the program is pretty brutal because I live in Los Angeles and the program is in Santa Monica. I'm talking about 9.8 miles but forty-five minutes on the highway, but I'm happy to drive to the proverbial Timbuktu if it means Sophie is happy and getting what she needs to lead a good, dignified life of value. 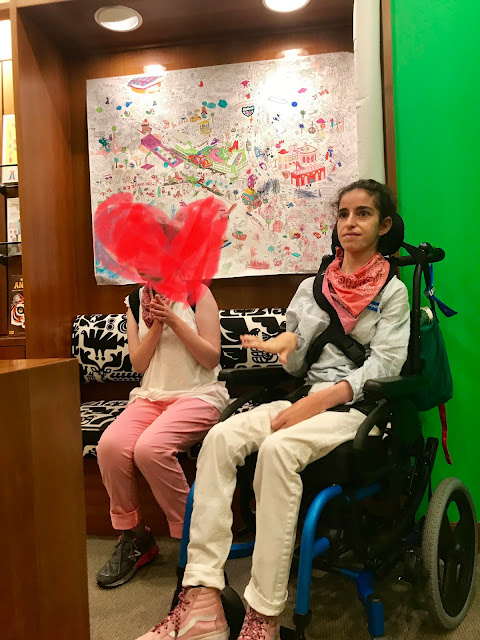 I found out today that she has several classmates from her PRESCHOOL in an LAUSD program at UCLA. That was back in the last century! I've lost touch with nearly all of those families in the last twenty years, mainly because we don't live on the west side where most of them still reside, but I have such good memories of those early days, and I'm thrilled to get acquainted again. Sadly, several of the children that Sophie began her school years with have passed away -- in those early childhood days, it was not unusual to go to at least one funeral a year of a young person. Looking at these grown men and women and imagining all that they've been through is emotional for me in bittersweet ways.

Saint Mirtha is training Sophie's fabulous new aide, Lauren, this week. I dropped them off both mornings, went for a walk on the beach and then did some freelance writing work yesterday, another interview for a possible job today and then -- wait for it --

began revising my manuscript at the public library.

The universe is abundant.
Posted by Elizabeth at 5:25 PM