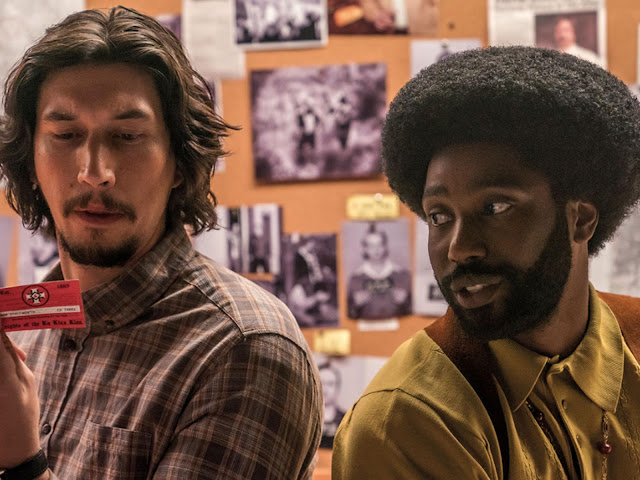 I hesitated to even write a review for Spike Lee's new movie because I had so many ideas about it, most of those ideas are floating through my brain like guppies waiting to be swallowed whole by a whale and because -- well -- critiquing it is as overwhelming as the feelings provoked by it. I just wasted a sentence, though, on a movie that deserves, probably, an academic treatise, such is its complexity and craft, and while I didn't think it perfect by any stretch, it made me feel uncomfortable and that's exactly what a movie about race in America should do to a white woman. I don't think there's any need to explain why I felt uncomfortable (and it's a good thing to be white and feel uncomfortable today), but when I wasn't feeling uncomfortable, I was lifted up in spirit by Spike Lee's ability to meld so many seemingly disparate things -- the power of image to influence people, the power (and not so subtle warning of the power) of image in cinema, in particular, to even let people off the hook from truly regarding racism, in this country, the power of laughter to both highlight and horrify, the power of the patriarchy, the obeisance to the patriarchy by even those who are being oppressed, police brutality, anti-Semitism, Trumpism, music and culture and fashion -- into a piece of art that left me feeling both exhilarated and drained.

Far From the Tree
Sorry to Bother You
RBG
Won't You Be My Neighbor?
Learning to Drive
Love and Mercy
Not a Three Line Movie Review
While We're Young
Ida
Force Majeur
Gone Girl
Saint Vincent
Get on Up
Begin Again
Chef
The Immigrant
Cesar Chavez
The Grand Budapest Hotel
Gloria
Labor Day
Philomena