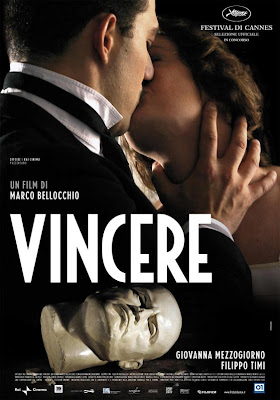 Visit to acupuncturist and lunch with doctor afterward

Bought ticket to and watched the Italian film Vincere, the story of Benito Mussolini's first wife, Ida. She and Mussolini had a very passionate love affair when he was only an editor of a "revolutionary" newspaper; she bore him a son but as he continued to rise to power and to utter derangement, she was denied by him and actually lived for many, many years in an insane asylum. Her son was taken from her guardians during the very scary fascist times and eventually died in an insane asylum as well. This was a very passionate movie made especially effective with black and white clips of Mussolini screaming to the crowds. I couldn't help but think of the current passions running so high in the United States, today, especially in the aftermath of healthcare reform. It made me feel angry that people in this country, those that are protesting the loudest about government takeover and socialism and all that garbage, have the nerve to do so. When I am reminded of the true nature of despotism and of fascism and how it rises from real destitution, it's hard to take seriously, to have nothing but disdain for those who are comparing it to our country, now. I'm not a scholar and I'm the first to say that I probably don't know more than I do know, but when I hear these people ranting and raving about Obama and comparing him to Hitler or Lenin, I have to think DUMB. It's just plain dumb. As I drove home through traffic after my very satisfying afternoon of relaxation, popcorn, diet coke and a really good, transporting movie, I thought about how technology and education and awareness have all conspired to make the world a very different place and that really education and awareness are what it's all about. I thought how the fundamentalists of all persuasions try to staunch progress and stymie education, how their "leadership" is based on fear. I thought about the eight or so dumb-ass lunatics caught in Michigan yesterday who were conspiring against the evils of government with Jesus on their side. I read that most had not finished high school and some had never gone to school. I thought of all those tea-baggers with their silly white people agendas, afraid that the America they know and love has gone the way of "the blacks" and "the Mexicans." I thought of myself and the twinge of almost fear I felt when I saw the "report card" of the school that Sophie goes to -- a school on the edge of the hood where you are hard put to see any white students at all. The report card gave statistics -- how many Hispanics, how many African Americans, how many Asians, etc. How many whites? 0%. Zero percent Caucasian which means, since Sophie is definitely a student at the school, she is in such a minority that it's less than 1%. The twinge of fear is replaced, for me, by wonder. Wonder to be alive in a world that is growing faster than I can imagine -- a world that will, maybe, perhaps be more tolerant and diverse than we might imagine -- or not.  Vincere means win, and the movie makes clear that winning is ambiguous. Ida remained fearless throughout her life and uncompromising about who she was (Mussolini's wife and the mother of his heir), but she and her son died and were never recognized as sane or even persons of dignity; they were both buried in common graves. Mussolini beat them, in a sense, but he himself was eventually executed, hung by his heels by the people. These are the thoughts I had as I snaked my way home to my girl.

Check.
Posted by Elizabeth at 7:45 PM