Saturday Night on the Town 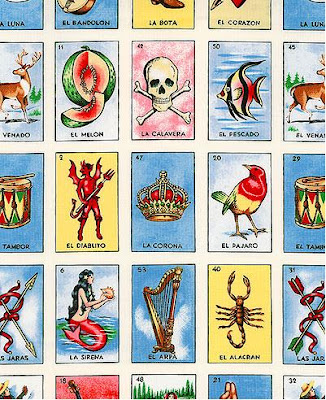 Henry, Oliver and I went out to dinner tonight on Hollywood Blvd with one of my dearest friends who moved from here to another city half a year ago and is visiting on spring break this week She and her two children met us at La Loteria (and I don't know how to add the appropriate accent to Loteria on this computer), a fantastic latino spot with delicious, authentic Mexican food and really, really good margaritas (not too sweet, plenty sour and lots of salt). While we waited for our friends, Henry noticed this Hollywood star in front of the restaurant 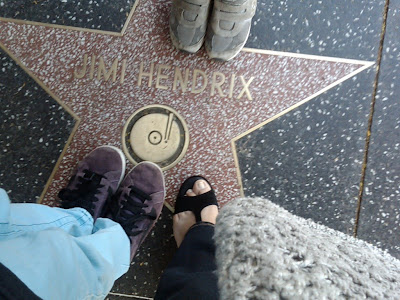 La Loteria is a bingo-like game and the art on the famous Mexican cards is fantastic. The restaurant itself is a wonderful space, huge and open with a wall of tequila bottles and giant posters of the loteria hanging on the walls. La Sirena is my favorite, of course: 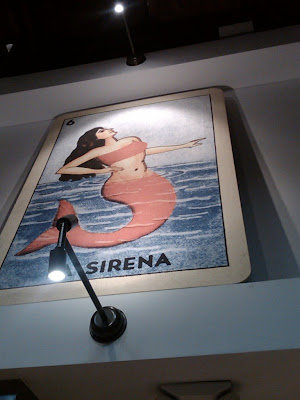 My friend and I sat next to each other and the four children sat opposite, and while the restaurant filled up and the noise got louder and louder, we still managed to converse about the books we were reading, the movies we'd seen and our husbands, all while sipping on the margaritas and remonstrating the children as they laughed raucously and ate chips and fried cheese and tacos. About halfway through, Henry felt cold and left the restaurant to get his sweatshirt out of the car. He came back and shouted at me over the din I couldn't find the car! Exasperated, I grabbed the keys and walked outside and around the corner, and where I'd parked my car was a

Hundreds of people were walking Hollywood Blvd, into and out of the tattoo shops and costume party stores. The sky was blue and the sun was setting at the west end, making the sky a deep pink and the light a ridiculous gold. It seemed unreal, and for a moment I thought that maybe I'd forgotten where I parked but I knew, too, all at once that my car was towed. The enormous sign that I had somehow not seen an hour ago, rose over me and practically threw me into shadow. I slunk back into the restaurant and announced to my friend and the kids that my car had been towed, and she put her hand over her mouth and sort of laughed and pushed my near-full margarita toward me on the table. The boys were excited about the prospect of police action.

When I called 3-1-1, Mayor Antonio Villaraigosa himself answered the phone and told me what to do. He also advised me to wait for the next service agent and while I was waiting I could enjoy the music of the LA Philharmonic.

Good thing I was drinking that margarita. And even better that my red snapper with tomatoes, onions, capers and olives was moist and flavorful,  and that my kind and generous friend bought me and the boys' dinner. When she dropped us off at the tow lot, Henry insisted on escorting me inside where we were led through a series of locked gates and I was helped by a very courteous gentlemen who also kindly took my credit card and charged me $248.34 for holding my car for two hours. I suggested to the boys that we should wait until the morning to tell The Husband and Father about the excitement, so when we pulled up into the driveway and walked up to the front door, Oliver announced as soon as The Husband opened the door to greet us

Mom got the car towed and it cost two hundred and fifty bucks!
Posted by Elizabeth at 10:07 PM