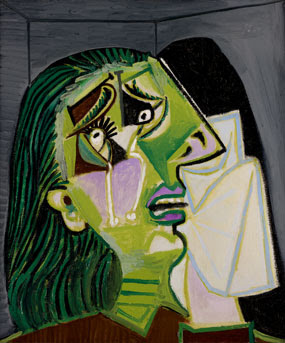 The Weeping Woman - Pablo Picasso
I cried today because:

1. I spent the better part of it on the phone with the insurance company and the mail order pharmacy trying to unwind the knots created by said insurance company to deny payment of a treatment for my daughter's refractory seizures. I was transferred probably four to five times and spoke to five different people, each of whom did not claim responsibility for knowing what to do and each of whom asked me my name, my daughter's ID number and date of birth, our address and the last four digits of my social security number. The whole episode is going to be called Birth Controlgate

2. I am burnt out at this whole spectacle of a medical system some of us call "the greatest in the world." I had listened earlier to some inane discussion on NPR between economic healthcare academics and some jokers at the conservative Heritage Foundation, both of whom spoke on and on in the driest of tones about healthcare costs, etc. etc. ad nauseum, suggesting that consumers want and need to "shop" for their healthcare plans to get the most competitive rates and that hospitals should make their fees more accessible and public so that one can SHOP for the best rate, etc. and it was all INCREDIBLY INSANE.(and I might add here that I know what they were talking about and I'm perfectly aware of the luxuries we do have here in the U.S. of A and the lack elsewhere and there is a very large part of me that even feels guilty complaining about this sort of thing but humor me, humor me, humor me). At one point, the conservative guy from the Heritage Foundation compared the shopping to food stamps and cheese and milk and the fabulous job grocery stores do or something or other and I actually wanted to stop the car and yell at the radio or at the very least call in and speak, but it wasn't a call-in show so instead I thought about how FUN that would be, to actually shop around for the best place for Sophie to get treatment -- to see what hospital outcomes were, what each individual doctor's results might be, and then figure out what plan covers what doctor. GREAT IDEA! is what I thought, maniacally.

3. I now have to track down The New Neurologist (no small feat when these neurologists are overwhelmed with patients and are part of vast university systems) or her nurse to get her to write a letter of medical necessity stating that the hormones she prescribed for Sophie are not for birth control, technically (this despite the probably mile-high folder on my daughter that the insurance company possesses). I can't imagine how frustrating this must be for doctors...not to mention the cost, the cost, the cost of the inefficiencies. The only way I feel better about this is when I resort to utter, scathing sarcasm and with dripping condescension tell the poor soul on the phone that my daughter, who has seizures all day everyday and also has her period is NOT SEXUALLY ACTIVE that it's not something I'm particularly worried about right now which leads me to the inevitable

4. I lost my temper with the poor little Bartleby with the Indian accent on the phone who works for Anthem Blue Cross. I didn't use any curse words, except for bullshit, I think, but I did tell him that he works for an unethical industry and I didn't know how he could sleep at night. I was loudly weeping at that point, in full drama mode, and I spilled out that my daughter right that moment was suffering from hormonal issues and perhaps this medicine would help her and the fact that Anthem just raised her premium by double but wouldn't take a prescription from an eminent neurologist from one of the biggest epilepsy centers in the country without her having to do a song and dance to get through the insurance company's group medical review board and I took a few heaving breaths but I was dead serious, albeit emotional. I can't even imagine what the poor guy felt. This is what he said, though:

I understand your frustration, Miss Elizabeth.

So I'm not even sure they have real people working at Anthem, anyway, and I'm probably just another asshole who thinks such tirades are going to not just change our abysmal situation but the system itself. It's weird how all my meditation and trying to be zen-like goes flying out the window and I realize simultaneously as it's happening that this is a test, sort of, and either I'm passing with flying colors or I'm being beaten to a humble pulp.

I feel better, now. I've put off til tomorrow what I can't do tonight. And that is call The New Neurologist's office, tell the answering machine that I really need some help. Then I'm going to take care of Sophie and ensure that she doesn't get into any trouble.
Posted by Elizabeth at 10:44 PM