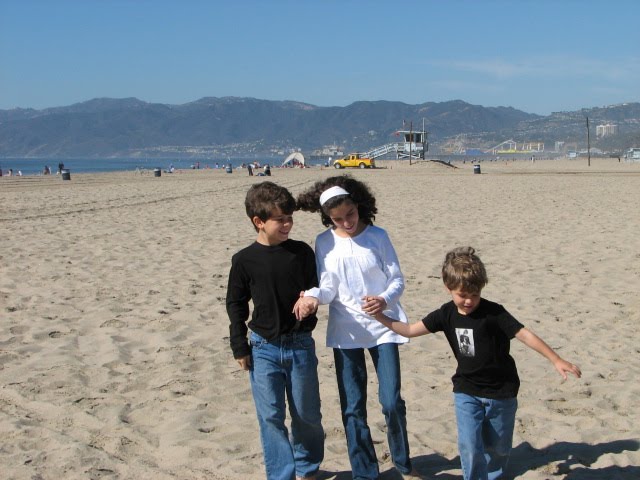 An interesting dialog about siblings of children with special needs (I'm so tired of writing that phrase by the way!) and their perceived responsibilities toward their brother or sister, especially as the parent primary caregiver gets older or dies, is going on over at the wonderful blog Bloom. I've touched on these issues a bit in my blog and certainly have devoted a few chapters on the subject in the book I'm writing. I've read what little literature exists regarding the effects of having a child with special needs in the larger family and believe I sort of, kind of, know what I'm doing.

Just like everything else, though, that comes with the territory, there's a fine line between protecting my boys from taking any responsibility for their sister and the fact that it is what it is. I have intentionally paid them "extra" attention and made sure that they can be angry and stubborn and disgusted and sad without feeling guilty about their complex feelings. Given their ages, they can not possibly be expected to "take care" of Sophie, but I do ask them periodically to check on her in her room and they certainly go into help mode when she has a big seizure and I need their help. Henry, now eleven, learned to buckle himself into his car seat seatbelt, unbuckle himself and jump out when he was no older than three. I didn't realize this was unusual until I drove a carpool and found myself helping the more "helpless" children that I drove, those that held their arms up for me to lift up and out of the seat and then to jump down out of the car. Oliver, too, is probably more self-sufficient than most kids his age and I don't believe that either of them resents this.

One night, a few years ago, when Oliver was no older than five, he and his brother were in bed and, I thought, fast asleep. I heard Oliver call out to me, so I went into their bedroom and asked him what was wrong. I'm scared, he said. I asked him why and he replied What's going to happen to Sophie when you are old? Who is going to take care of her? If I could have, I probably would have gasped, but I was sort of shocked into silence there in the dark by my very young son's bed. I imagined him lying there, in the dark, pondering the deepest, darkest things so I prayed, quickly, that I might answer him correctly. So much of parenting is winging it, no? I told him that Mommy and Daddy would always take care of Sophie or have someone help us to take care of her for as long as we could.


Again, I could have gasped, but I think I smiled and told him that that was a long, long way off, and that by the time I was really old, he and Henry would be big men and would be able to help to take care of Sophie. I think the idea of a being a big man appealed enough to Oliver that he was distracted from the larger existential turmoil, so the conversation ended and he went back to sleep.

What the whole exchange did to me, though, was to put into stark reality just how much children absorb and how complex their feelings really are. I don't think I was naive about the "effects" of having a child like Sophie and I certainly had done my fair share of worrying what the stress of seizures was doing to them, but the bigger and, I think, scarier issues of long-term care and the boys had not crossed my mind until then. I imagined my death in the far future and Henry, the compassionate, easy-going son immediately saying that they would have to care for Sophie just like mom wanted. I then imagined, with my customary dark humor, Oliver saying, mom's dead; it's time for an institution and that thought lightened the heavy load, however briefly (and I would clarify, to those who don't know me that I'm kidding).

What I do trust, though, is that each of my sons will figure out what he is capable of in caring for his sister. Parenting mirrors life's ambiguities and while I like to imagine that all will be well when I am old and gone, I also think who knows?
Posted by Elizabeth at 11:56 AM