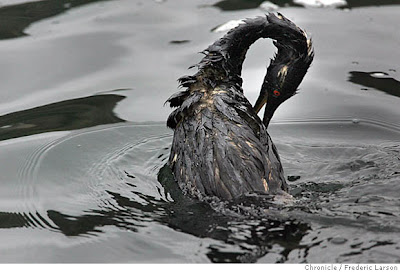 It's late on Saturday night as I'm typing this, but I know I'm not going to get to it tomorrow because I have work to do tomorrow -- I'm reviewing grants for the federal government (yikes!), and they're due on Monday morning. I had hardly any time to write on Saturday, what with the baseball games and parties. I don't go anywhere these days except to, well, baseball games, and I actually had two parties to go to, and they were both great. So now it's close to midnight (yes, I'm so not a big drinker that I can come home from two parties and sit down at the computer and write -- maybe not anything scintillating, but I can still type!) -- and I've been thinking about this post for a few days and wondering how to write it and what to say.

It's about the oil spill in the Gulf. It's about wondering what the Drill Baby Drill crowd thinks about the spill. It's about reading what the woman who famously shouted Drill Baby Drill at one of her inane rallies said about the spill (that accidents happen but we've gotta keep drillin') and it's a bit of an extension to my previous post about those tea-party bagging, whatever folks that spend such an inordinate amount of time protesting about the evils of government and the slippery slope to socialism and how we're all going downhill and they want to bring America back and you know the rest.

I saw the photos of the birds, today, the birds who are being plucked from the Gulf, one by one and fed, drop by drop, Pepto Bismol in tiny, tiny syringes and I'm imagining that the Pepto draws the oil in their tiny bodies to it, but I don't really know. Every time I see those birds, their feathers black and slick with the muck I think of hell on earth. I think of evil, not the evil of human on human but a greater evil, actually, a true evil, that of rape against creation. As I type these words, I cringe at the drama implicit in them, the judgement. I think of the giant cars, the Escalades and the Jeeps, and the behemoth SUVs that careen around my neighborhood, that drop their precious cargo of children off at ball parks. I think of the DVD players in those cars and the blasting air-conditioners and the chorus of those who argue that we're fighting to preserve our way of life. And I can't help but hate "our way of life." Our way of life is disgusting, really. I drove a minivan for years, and while I tried to justify it by claiming that it helped me with Sophie; the fact is that when I downsized to a much smaller, more gas-efficient car, we fit just fine. Sure the boys grumble a bit when we're all inside it, and I can't fit a basket of CDs in between the front seats, but we fit just fine. I plan on driving this vehicle until I can get an electric one or something that does an even tinier amount of damage to the planet. While I'm not absolving myself of contributing to this culture of consumerism, because I've done my share of bad, those big cars make me particularly grumpy -- and don't get me started on all the bozos who are fighting tooth and nail about climate change. 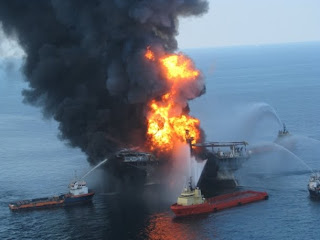 Well, I'm all over the place with this post now, and perhaps the mint julep and the margarita scrambled my brain enough today that I just can't pull it together into something coherent.

It was just those birds in the oil that did it to me.

Sometimes I want to get rid of all of it. Start fresh. Buy only what I need and maybe a couple of pretty things to look at. Plant a garden and eat from it. Read a lot of books. Sort of like John Prine's song Spanish Pipedream whose chorus goes like this:

Blow up your T.V. throw away your paper
Go to the country, build you a home
Plant a little garden, eat a lot of peaches
Try and find Jesus on your own.

and later ends with this:

We blew up our T.V. threw away our paper
Went to the country, built us a home
Had a lot of children, fed 'em on peaches
They all found Jesus on their own.
Posted by Elizabeth at 12:11 AM