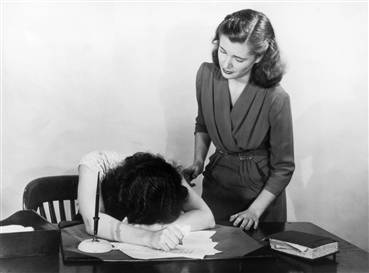 That's me there, with my head on the desk. Those papers? They're from insurance companies and Medi-Cal. The lady on the right is an angel in disguise -- my good friend Suzy C. who I spoke with on the telephone today and who had some pretty great words of wisdom.  As a fellow mother of a child with special needs, she gets it, and while willing to help me out in my time of need probably felt a tiny bit grateful that it wasn't her with her head on the desk -- this time. 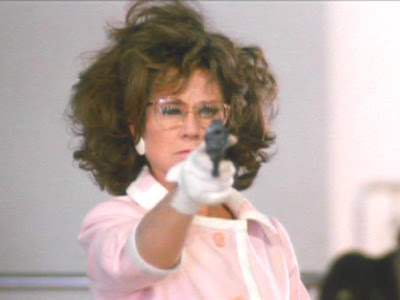 Who is that? That's me, a little later in the afternoon. I was on the phone all day with LAUSD, my daughter's school and learned that her school year has been shortened and she WON"T be in school this summer after all. If you remember, she's been OUT of school for the past nine weeks and today was the first day she was supposed to go back. Instead of heading to yoga and the grocery store, though, I learned that her aide was furloughed today because of budget cuts so I kept her home. I also learned that school ends the third week of June and doesn't start back up until the middle of September.

I then dug the rose tinted glasses that I actually wore in eighth grade, when I was at the peak of adolescence, out of a box, donned the pink and white suit and the white gloves, my handy-dandy gun and ----

You figure out the rest.
Posted by Elizabeth at 4:49 PM