I wasn't going to even use the term "ghetto camp" on my blog because I was feeling too politically correct and I'm sort of disgusted by people of means, myself included, that lift words like ghetto, words that signify something serious, something that I actually know nothing about, but then I thought what the hell, I think it's funny to call the camp where I dropped my oldest son off this morning ghetto camp to signify that it's right here in Los Angeles, in a giant park and that it was incredibly cheap, cheap enough for us to afford when we are literally three steps away from insolvency.

I dropped my oldest son off at Ghetto Camp today. But before we got there, we ran around like chickens with our heads cut off getting ready. Oliver had earlier insisted that he did NOT want to go to overnight camp, so I signed him up to play soccer all week. Soccer is my sport, he told me during baseball season, not baseball. This morning, naturally, he decided that soccer is boring and he wished that I had LET him go to camp. The boys have been home from school, now, for two weeks, and they've been playing and having a good old time, but let's just say that their bickering and wrestling that goes a little beyond play is getting irritating to me. They're getting on each other's nerves as well, so having a week apart was going to be good, I thought. Because I'm a bad mother, Oliver is nine years old and still doesn't know how to tie his shoes, and because they are going to be apart from one another for five whole days, and love each other so much (sarcasm implied), imagine my surprise when I came upon this freaky scene: 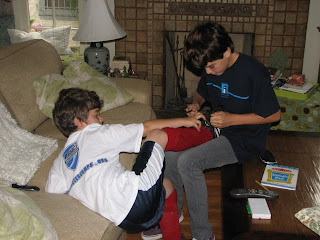 Henry helps Oliver tie his cleats.
After tearful good-byes, Henry and I left the house and drove up to Ghetto Camp. Henry said that he was so excited but his stomach felt weird. That's butterflies, I said, and I realized how much I love that expression. It turns out that Ghetto Camp is adorable -- like something lifted from my childhood. It looked like a mini version of Yosemite, actually, with pine straw everywhere, birds singing and a cool breeze blowing through the pines. 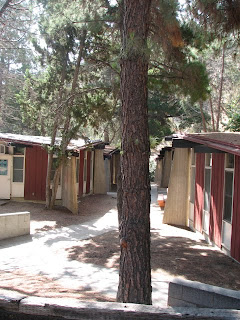 The only thing that looked remotely ghettoish was this 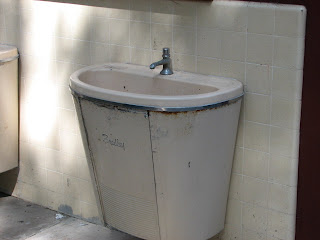 and I didn't ask any questions.
Henry randomly got a bunk with one of his best friends -- 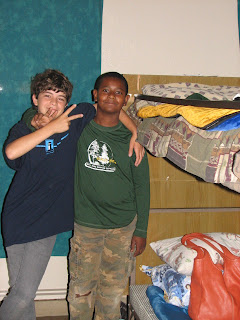 And I tried not to cry when I hugged him good-bye. 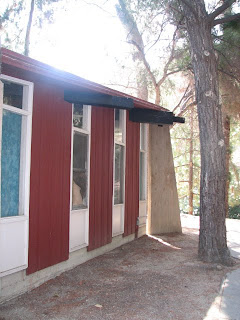 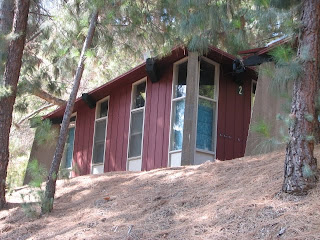 Posted by Elizabeth at 2:36 PM