The Last Beating and Some Gratitude

Today, my daughter Sophie finally received the medicine her neurologist ordered to treat her electrical status epilepticus in slow wave sleep, or ESES. This rare seizure syndrome is particularly devastating for my daughter because it causes global problems: eating difficulties and accompanying wasting, cessation of walking and ataxia, constant drooling and, of course, near constant seizures, particularly while sleeping. The first time Sophie was diagnosed with ESES, more than five years ago, was probably the  most devastating period for our entire family, outside of her initial diagnosis at three months. However, she was treated with intravenous immunoglobulin, or IVIG, and the ESES resolved. Needless to say, when we learned that Sophie was having a recurrence of the disorder, we were upset but relieved to know that the treatment for it was something that she had responded to, successfully, before and that it should help her again. Six weeks ago, Sophie's neurologist diagnosed the recurrence of ESES and ordered IVIG for treatment.

You probably know what comes next. Six weeks of waiting while the insurance company, Anthem Blue Cross, investigated our doctor's prescription and the medical necessity of the treatment ordered. You also might know or expect that, yes, we have an individual insurance plan with Anthem and are therefore not protected by a larger company group policy. You also might expect that our fifteen year old, extremely disabled daughter has to have her own insurance plan because our family plan (that covers my husband, myself and our two young sons) will not accept her with a preexisting condition of epilepsy. You also might expect that the premiums for both her plan and our plan have increased by almost 50% in the last year and a half. You might NOT expect that we rarely use the benefits because most of the doctors we visit are considered alternative and thus generally don't accept insurance for payment, meaning, we foot the bill. We have also been blessed with good health and work hard to maintain it. We pay premiums for health insurance, although we can barely afford them,  because we are responsible citizens and because we know from our experiences with our daughter that the unexpected happens.

I am sure that you are nodding your head right now because you've heard it before.

I'll sum it up: my daughter needs another infusion in about six to eight weeks before we will see any results. If Anthem Blue Cross had approved the treatment prescribed by her doctor when the disorder was diagnosed, we would be nearing the time for the SECOND treatment and that much closer to relief -- relief from constant seizures wracking our daughter's wasted body and wreaking havoc on our family.

As a parent advocate, both paid and volunteer, as a board member of The Epilepsy Foundation of Greater Los Angeles and, most importantly, as a mother of a child with a severe seizure disorder, I implore you to regulate these gross infractions of Anthem Blue Cross. I know that I am not speaking only for my child. You know that I am speaking a tired story -- of inefficiency, ignorance, mediocrity, amorality, and systematic corporate greed run amok at the expense of children.

I hope you will help to change this. 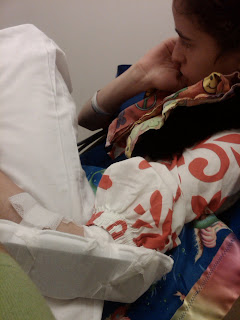 Now for the Gratitude!!!
Sophie had her first infusion of immunoglobulin and it went well. We were at the infusion center with a team of incredibly efficient and kind nurses for about seven hours. Despite being exhausted (you know how much I hate hospitals and it was difficult to see Sophie feeling so terrible), I read your comments on my blog and felt your good wishes. I am grateful.
Posted by Elizabeth at 6:47 PM