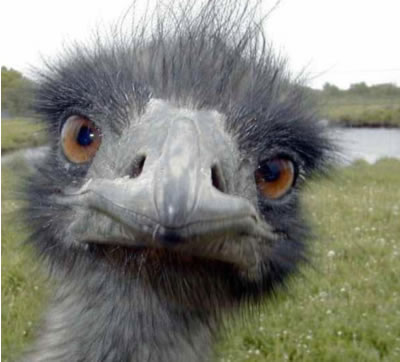 Ostriches evidently have the largest eyes of any land animal, and it's a myth, apparently, that they stick their heads in the sand to avoid things.

When I received the email in my inbox yesterday from Medscape, I didn't read anything I didn't already know. I sadly know several children who have died from SUDEP. Either The Husband or I have been sleeping with Sophie all of her life because of that risk.

What struck me about the article was the definitive study that was done, proving that children with uncontrolled seizures are at dramatically greater risk of early death than those whose seizures are controlled. SUDEP has other risk factors as well, and the important point to be made is that the medical community has not been as forthright as they might have been about SUDEP for a very long time. The reasons for this are many, as I said in the other post. In fact, it was in England that a group of parents who had lost children to SUDEP formed a group to explore why they had no idea that death was a risk in their children with epilepsy. It has only been a decade or so since this issue has received the attention it so deserves. A fascinating history of the disorder and the appalling lack of research surrounding it, including the story of Queen Elizabeth's uncle, Prince John, who died of the disorder, can be read HERE.

What does it mean for people like me? Other than the shock value, the ominous foreboding, the fear and anxiety that the article provokes in me personally, it actually forces me to pull my head out of the proverbial sand, talk about this issue, educate others about this issue and work harder to increase understanding and awareness around any issues having to do with epilepsy. We need to know more about this disorder. We need more money to study this disorder -- for prevention -- for management -- we need to end seizures.

So, scratch the ostrich in the sand concept. Who am I kidding? I'm the person who ran to Barnes and Noble and looked up "seizures" when the New Neurologist diagnosed Sophie and told me don't read anything about infantile spasms because it's all depressing.  I read EVERYTHING, always have and always will.

I'm going to use my HUGE eyes, read these articles and hold my head up. I know I can't control whether this fate might befall my child, but I can sure as hell learn about it and work to end it.

(but I will put my head in the sand rather than read about the increasing violence in Libya, including our country's actions, the continued grotesquery of Newt Gingrich and the hypocrisy of the Repubs in general)
Posted by Elizabeth at 6:57 AM