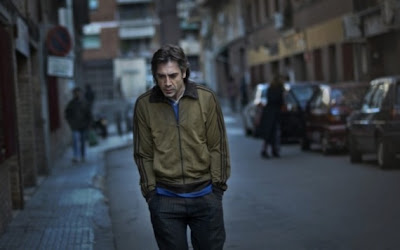 I am in a daze tonight, late, just getting home from a solo trip to the movies where I sat in the dark and was enveloped by the movie Biutiful.

I don't know what to say -- I've seen nearly all of Alejandro Gonzalez Inarritu's movies, and they have been ponderous at worst and  ecstatic at best. I'm going out on a limb right now to say that great art for me always, always always transports me,  and is a reflection, seen through a glass darkly, I think, of the artist's soul - his or her transcendence. Javier Bardem seems to be a vehicle for great art -- it stares out of his huge, sad eyes and settles into the deep laugh lines around them. This movie is dark and intense and disturbing and so beautiful that I sat, stunned, with tears in my eyes when it was finished.

I've been hard put to explain why I thought the recent Social Network was a horrible movie -- one that "entertained" me for the two hours that I sat, subject to its slick and witty seduction, but left me wanting to shower off the filth that it portrayed. A great movie (again, I'll qualify with the words "to me"), no matter the subject matter -- and the moral conflicts and constant despair of Biutiful make the lowlife characters of Social Network look like the cast of Leave it to Beaver -- reveals the vision and soul of the artist and that vision and soul is something recognized that is collective. It is love.

I felt tonight as if I'd escaped my little life for two and a half hours and glimpsed another. I watched Bardem play a single father of two beautiful children, a man dying a slow and hideous death from cancer, married to a messed-up and mentally ill woman and caught, himself, in a dark underworld of corruption and social despair. I watched him commune with the spirits of the dead, fall into the arms of a strange and magical healer and confessor who shared his powers, parent his children with heartbreaking tenderness and strength and make feeble attempts at redemption. And despite the horrific details -- the crazy exploitation of immigrants, the insane web of lies and corruption that govern commerce and making a living  -- he is redeemed. It's all redeemed.
Posted by Elizabeth at 1:12 PM