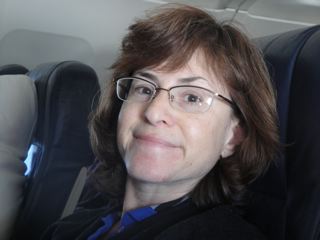 Each Wednesday I am going to feature a brief interview and/or highlight of a very interesting person in my life. I'm calling the post Moon of the Week, and today I'd like to introduce you to my friend Michelle Krotinger Wolf. I moved to Los Angeles thirteen years ago, pregnant with Henry, and Sophie nearly three years old. I took Sophie to the park several times a week and pushed her in an infant swing, generally alone, for hours. One day, I saw a dark-haired woman pushing a red-headed boy in a swing and knew immediately that there was something special about the little boy. I'm not shy, if you didn't know, and I introduced myself to the woman and so our friendship was born. Danny and Sophie have been a part of each other's lives in some way or another for nearly thirteen years and currently attend the same school. Michelle is an incredible advocate for children with special needs, a real mentor when it comes to government and community advocacy and someone with whom I can share my biggest worries and feel more positive and calm and directed after doing so.
Here's her brief bio, and if that isn't impressive, I don't know what is!
Michelle K. Wolf is a non-profit professional and parent of a teen with CP and global developmental delays. She is the Director of Foundation and Government Relations for the Los Angeles office of the American Diabetes Association. She was formerly the Director of Serving the Vulnerable for The Jewish Federation of Greater Los Angeles, and in 2005, she co-founded HaMercaz, an innovative multi-agency collaborative one-stop model that helps Jewish families raising children with special needs with a focus on developmental disabilities. Michelle also served as Director of Public Policy/Grantwriter for the Alzheimer's Association of Los Angeles, Director of the Middle East Commission for the Los Angeles JCRC and was Press Secretary to Los Angeles City Councilmember Zev Yaroslavsky.
She is a graduate of the double master's program in Jewish Communal Service (Hebrew Union College) and Public Administration (USC) and has taught professional development classes through the Center for Non-Profit Management. She has a consulting business for non-profits who are looking for ways to innovate and collaborate.
Here's what I'm really excited about -- Michelle has just begun writing a blog about raising a child with special needs in the Jewish community on The Jewish Journal. You can read her latest post here, a wonderful story of taking her son Danny to Israel this year. I've admittedly been a bit jealous of Michelle's community and the inclusion efforts of her temple -- when my boys were going to Catholic school and we attended church regularly, the glaring differences between her spiritual community and mine were depressing. True, I might have started some sort of inclusion efforts myself or at the very least tried to lessen the isolation, but my efforts were feeble at best and I wasn't ever able to make any traction with the Powers That Be. (I wasn't cut out to attend Catholic mass, not to mention practicing Catholicism for much longer anyway.) And that's a whole other post! When I attended Michelle's son Danny's bar mitzvah a couple of years ago, I was blown away by the accommodations and efforts made by the temple to include these young adults with disabilities. It made a tremendous impact on me.
I hope you'll applaud Michelle's efforts by reading her new blog!
Posted by Elizabeth at 12:10 PM