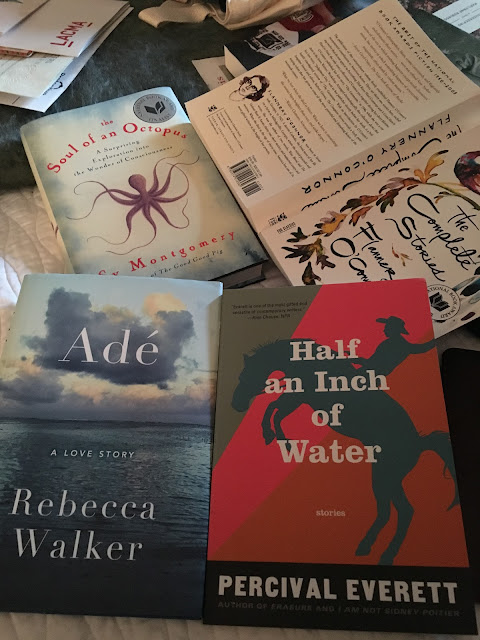 Those are the books I'm currently reading, simultaneously. Well, I'm not actually reading them all at once, like scanning them from left to right, etc. -- but I dip into each one and read a bit, then lay that one down and dip into another one. I'm almost finished with the lyrical Ade by Rebecca Walker (she's Alice Walker's daughter, and I actually met her at a friend's house the other day!) and just loved it. Percival Everett's short stories are like no other that I've read, and I delved into the Flannery O'Connor because I read about The Displaced Person, didn't remember it from earlier reading and was just gobsmacked -- again -- by her brilliance. It's about a Polish refugee who finds work on a farm in Georgia, shortly after World War II, and -- well -- let's just say that it's prescient and that we haven't evolved too much since then, especially given much of the country's response to allowing Syrian refugees inside and the fact that a whole lot of people support contenders for the throne of the plutocracy who want to keep them out. There's also my own complicity to contend with (I learned at Tomales Bay from the great writer Steve Almond that we are ALL complicit in one way or another with just about every travesty) as part Syrian and all American. But hey, my last rant on that SIT U A Cee On landed me in a heap of trouble, including being asked to get my head out of my poetry ass, so I'll just leave you this passage from the story. (The Gobblehooks is what the woman, a white sharecropper, calls the Poles because she can't understand their name):

Mrs. Shortley recalled a newsreel she had seen once of a small room piled high with bodies of dead naked people all in a heap, their arms and legs tangled together, a head thrust in here, a head there, a foot, a knee, a part that should have been covered up sticking out, a hand raised clutching nothing. Before you could realize that it was real and take it into your head, the picture changed and a hollow-sounding voice was saying "Time marches on!" This was the kind of thing that was happening every day in Europe where they had not advanced as in this country, and watching from her vantage point, Mrs. Shortley had the sudden intuition that the Gobblehooks, like rats with typhoid fleas, could have carried all those murderous ways over the water with them directly to this place. If they had come from where that kind of thing was done to them, who was to say they were not the kind that would also do it to others.

The Sy Montgomery book is an astounding one about an octopus and human consciousness. I can hardly stand how good it is and can only read in bits. I'll report back on it next year, which is just around the corner. My other Leisure Activity, done largely at night when the children are safely in their rooms either sleeping or playing horrific video games, is watching the second season of The Affair. It's on Showtime, and I don't subscribe to Showtime, but I signed up for a trial membership, and I'm in. I know there are probably better quality shows right now on the TV, but I can't stand a crime thriller or anything with lots of lawyers or intrigue on The Hill or spies and Strong Women Who Never Smile but are CIA operatives in the middle east. Give me a cheesy drama with lots of graphic sex, good acting and unbelievable story lines that revolve around marriages and child-rearing and New York City and Long Island over self-conscious Claire Danes combatting terrorists or fake southern accented Kevin Spacey sliming Washington D.C. Don't watch The Affair with your children (just allow them to steal cars and shoot up people in foreign lands with fancy guns and that all-American camo wear) or your parents (if your parents are like mine) because I repeat: the sex is graphic and there's lots of language and pretty much every single person is despicable, but it's a good soap opera for the likes of me.

I got my nails painted bright red today -- just in time, I told my friend -- for my drive up to snowy Yosemite tomorrow morning and my phantom lover. Just kidding on the lover -- phantom or not. I am leaving with the boys for the rest of the week and meeting my parents and two of my nieces at my favorite place on earth. Yosemite is a holy place, in winter or summer, and while I did just read a disturbing article about the thousands of Native Americans who were killed and otherwise displaced from their native lands, including Yosemite, I will approach it with reverence and humility and full acceptance of my own complicity as a white woman, reaping benefits hundreds of years later, my nails blood-red.

Posted by Elizabeth at 5:50 PM