In case you weren't here last week. I inaugurated a tradition of posting something from the old blog archives every Saturday night. Since I posted the following last year, I came upon this photo of myself (above) in the described bedroom. I was actually only ten or eleven in this photo, apparently still wearing Danskins and not yet a teenager, but the canopies had come off the bed, and the decor coming was only a twinkle in my eye. 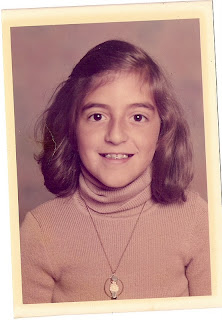 Mine had green and white shag carpeting and two single beds, canopied, with green and white polka-dotted bedspreads. I hid racy books under the mattress that I found lying in my parents' room or den: copies of Jaws by Peter Benchley, books by Harold Robbins andLooking for Mr. Goodbar. I had a record player/stereo with a smoky plastic cover that sat on a low chest in the bay window (one of the perks of being the oldest of three daughters was getting the room with the bay), and I'd lie on the rug and play music for hours, The Carpenters and John Denver, the Beach Boys and the Mamas and the Papas -- later the Beatles and Van Morrison and Boston and Fleetwood Mac. I'd lie on my back with those huge squishy black headphones on.
Oh, the seventies.
I was powerfully awkward, a bookworm behind glasses, sweet and smoldering all at once. The photo above is around sixth grade, so I was on the edge of being a teenager, still confident, for the most part.  I think that's a Holly Hobbie necklace, and I must have taken off my aviator framed glasses for the picture and endured the giant blur.
On one wall was a giant cork bulletin board, filled with photos and awards, swimming ribbons and magazine covers from Teen and Seventeen. On the back of my door was a life-size poster of Clark Gable. Weird, right?I think it had something to do with living in Atlanta and being enamored of Gone with the Wind for a time. I had my own bathroom then which was also carpeted in shag. I had a bookshelf in the bathroom, and on top of that resided my owl collection. Over the bookshelf and all those owls, I hung a circular hook rug that I'd hooked myself -- a large owl. It was green and orange and spectacularly ugly. I wish I still had it -- I could probably find something similar, though, in Anthropology. On the bathroom sink lay an array of big, fat Bonne Bell Lipsmackers, a Clairol hot roller set, my rouge (that's what we called it, then) and mascara, Love's Baby Soft and Jean Nate.
I was reminded of all of this when I stumbled upon this website:
http://teenagebedroom.tumblr.com/
What did your teenage bedroom look like?
Posted by Elizabeth at 8:00 AM