while eating a breadstick instead of a cigarette. 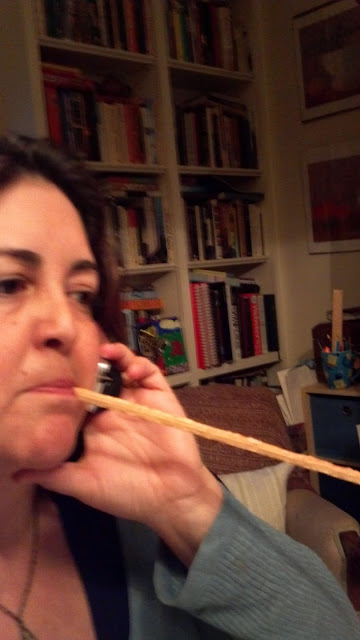 I got our premium bill in the mail today, due February 1st. I noticed that the amount due was considerably higher than my last payment (for January) -- exactly 24.89% higher. I remembered reading back in October that Anthem was hiking rates for individual policy holders up to 30%, and I think I did my usual ranting about it, but when we didn't get a notice, I was relieved. For once, I thought, we got a pass.

I quickly called Anthem and filed a grievance. I told the unfortunate agent that I believed they were out of compliance in not notifying us of the rate increase within a reasonable time. The Unfortunate Agent told me that I had been informed. I took a long drag on my breadstick. I said that I had not been informed and so it goes. I filed an oral grievance on the phone with her, and when I asked her for a written copy of the letter they claimed to have originally sent, she claimed that she would speak to a supervisor about it. I took another long drag on the breadstick. She also said that she would file my grievance and that I would be notified in 30 days that it had been filed and a "decision" would be made 30 days after that. I told her there is no "decision" to be made, and then I asked her for a written copy of the grievance. She told me that she couldn't give me anything but a tracking number. I took yet another drag on the breadstick. I asked her for the number of the California Insurance Commission. She gave it to me, and then asked me if I needed anything else. I told her that I felt sorry for her having to work for such an unethical business, and she asked me, again, if I needed anything else. Bless her heart.  I placed the call immediately to the California Insurance Commission and had a lovely chat with the Fortunate Agent who told me that she was hearing about these rate increases and the lack of notification about them. She told me that she would call me tomorrow morning with an update and when I asked her about Sophie's drug problem, she told me that she could help me with that, too.

I finished my bread stick and called it a day.

Posted by Elizabeth at 5:31 PM