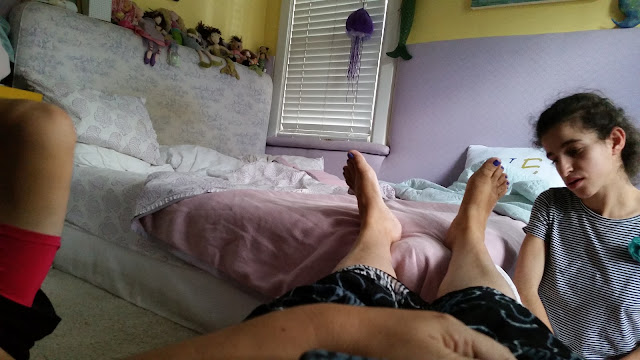 When you give Sophie THC, do you worry that she is getting high?

* That was the short answer. Here's the long answer. We are currently supplementing Sophie's cannabis oil with four or five drops of THC a couple of times a day. The THC seems to help with the Onfi withdrawal symptoms, particularly the tremoring that she was doing, over and over, and seemingly all day long. The tremors looked like seizures, even, as they were jerks -- hard ones -- in her arm and leg. When she sat on the floor, cross-legged, she'd bang her knee over and over on the floor. If you walked with her, she'd jerk her arm, over and over. They were not seizures, we found, through that godawful EEG. She doesn't do it anymore, as long as we give her those few drops of THC. As for getting high, if she feels a bit high, I really don't give a flying foo-foo. Somehow, we are supposed to accept the fact that every single one of the drugs that are given to our children from birth onward have hideous side effects, or are being used "off-label," or have an "unknown mechanism of action," yet are discouraged from trying a medicine that has thousands of years of history of use, reams of studies already done, no reported deaths and arguable long-term impact on the brain.

An older man in the parking lot of Trader Joe's noticed the End Epilepsy bumper sticker on my car. He asked me what it was all about. I told him that my daughter has epilepsy and that I used to be on the board of the Epilepsy Foundation of Greater Los Angeles and that I supported its efforts to end epilepsy. I also told him that my efforts now were more for anyone or anything that supports the medicinal use of marijuana. He told me that he has an adult son who had terrible seizures throughout his childhood and how he wished they could have used it. He asked me whether Sophie was using CBD or THC or both. I said, both. Then we laughed at people's concern over whether an epileptic might get high with CBD and a few drops of THC. I wish! I said. In fact, I told him, I support the legalization of marijuana both recreationally and medicinally, and I'm tired of making the distinction.