I haven't written one of my crazy, being the mother of a kid with special needs kind of posts in a while, but don't think that each and every day doesn't have its treasures. And I'm being a bit sarcastic, here, but above all, honest. So, this afternoon was a day that warmed my heart because when Sophie came home from school, a girl who just moved in around the corner called and said that she wanted to come over and visit Sophie. I've known this girl and her mother and sister for years, but they only recently moved into my neighborhood. Let me back up and say that other than the children who go to school with her, Sophie has no real friends. This social isolation is not something that I've neglected or something quickly re mediated if I only worked on it -- I believe that it's a common problem for those of us with nonverbal children who also have pretty severe developmental and cognitive disabilities. It's the biggest heart breaker of all, actually, greater maybe than the dozens of seizures a day or the relentless grind of diapering, feeding, bathing and dressing an adolescent. When I do think of it, I push it to the back of my mind so as not to overwhelm my heart.

This neighborhood girl -- Janie -- has taken a liking to Sophie in what I would call a true, nurturing sense. She is a quirky girl, dramatic and precocious and open. She is matter of fact with Sophie: she says Hello! and remarks on what Sophie might be wearing. She talks TO Sophie, rather than ABOUT her. When I told her that Sophie has so few friends and how grateful I was that she was visiting, Janie said, Well, Sophie, I am your friend! And she sat down on the floor next to her and picked up the various toys that Sophie likes to manipulate and mouth and played with her, chattering on like girls do. I stood in the doorway, in awe, with tears in my eyes. And then I went to get the camera. 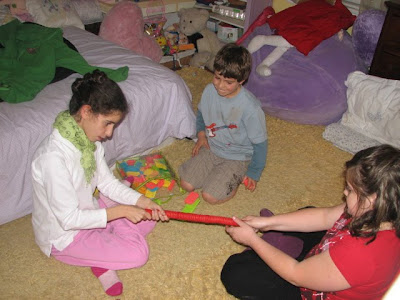 Like I said, my heart was warmed and my tears ran fast and all was good as I hummed at the stove, making grilled cheese sandwiches with pears and garlic french fries while my daughter and her friend, HER FRIEND!!!, were playing in her room.

At some point, The Husband came home early so that I could leave and go to a school meeting for Henry (the child who will soon be in middle school, my God!) and while I was explaining that my grilled cheese sandwiches with pear were almost done and don't forget to give Sophie her medicine and Janie is here and she is visiting and playing with Sophie! and then Janie walked down the hall to say hello to The Husband and while they were chatting and I was wrapping a scarf around my neck since it's getting cold out here in LaLa Land, I heard a small cry, a choked cry that didn't sound like a seizure cry but it sounded like something, so I ran back to Sophie's room and found her, head bowed, standing right by the door. And when I tried to open the door, a door that is cut off halfway so that we can keep it closed and her inside but still see her, well, her head was bowed and she was making these strange cries because a chunk of her hair was wrapped around the little old-fashioned lock at the top of the door. Sophie doesn't use her hands and I'm sure had twisted and turned and bobbed her head until the hair was really stuck and it took me a stifled frenzied moment to untangle it and her from the door, but when I did I realized

What if she'd had a seizure and fallen? Her hair, maybe her whole scalp would have come off! I said, almost hysterically, to The Husband while Janie looked on saucer-eyed.

But she wasn't, the Husband said.

And I know he's right. Except that I'm convinced the things I worry about are not the things that happen. If something bad happens, it's going to surprise me. And if something good happens, that surprises me, too.

Sophie made a new friend today and she almost got scalped.