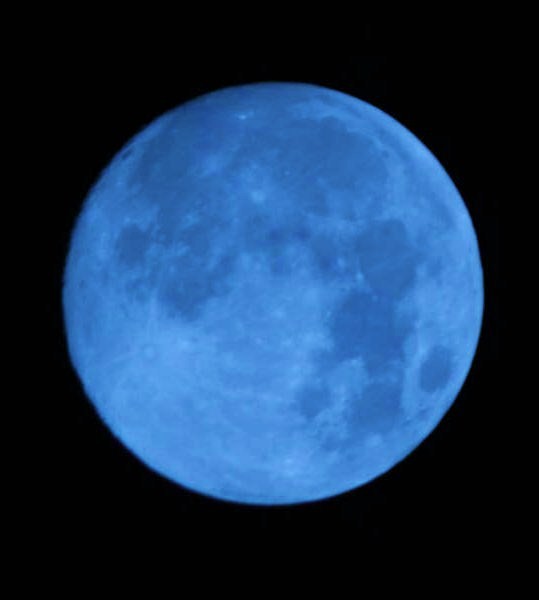 As most of you probably know by now, tonight will be a blue moon, or the second full moon in a month. That this happens "once in a blue moon," AND that it's the last day of the year, ushering in a new decade, seems especially auspicious to me. Or at least I'm going to insist on its auspiciousness. And it's a good thing, because I've very little inspiration this week and sort of dreaded the whole New Year thing -- the resolutions, the passing of the old, the ushering in the new, etc. I've never been much on the new year's eve celebration thing, preferring to go to bed early and pretend it's just another day.


The last day of 2009 is a doozy -- triply auspicious. Not only is it the eve of a new year, a new decade no less, there will be a full moon, a lunar eclipse and a blue moon to boot.


When a month is graced with two full moons, the second one is called a blue moon. You know, the once in a blue moon blue moon. The blue moon cycle is 2.72 years, making it a special, if not rare or unexpected occasion. The last blue moon month was May 2007 and the next will occur in August 2012.

On average, there will be 41 months that have two full moons in every century, so once in a blue moon actually means "once every two-and-nearly-three-quarters years."

Since calendar months of 30 and 31 days are longer than the actual period between one full moon and the next, which is 29.53 days, the surplus hours and days of each month, each year, accumulate until eventually there is an "extra" full moon in one month. Rather like a leap moon, a blue moon is a great big bouncing blue bonus.

Which is not to say that it looks blue. That sort of blue moon is altogether another phenomenon, wherein the light of the moon appears to be tinted blue. That effect is actually caused by atmospheric pollution created by particles -- usually smoke, sand, or volcanic dust -- from a terrestrial disturbance, which creates a color filter effect. The latest blue-looking moons were created by forest fires in the American west and oil field fires in Iraq.

Although blue moons do not cast an actual blue shadow, their very existence is a symbolic celestial reminder, a message out of the blue, as it were. A radio signal from the Great Goddess of Outer Space to us -- Her very naughtiest and sometimes least sentient children. She is broadcasting a plea for our loving attention.

If, on the night of a cerulean moon, we close our eyes and sit very still, take in great draughts of air, sigh deeply and open our hearts, we will be able to hear Lady Luna sing the blues. Broken-hearted, She watches down on our out-of-whack world, and She weeps.

And Her pain is our pain. In losing our connection to the moon and Her cycles, we have lost track of our own. We have forgotten how to live in conscientious sync with the workings of the world.

We no longer see ourselves as active and response-able participants in the connective universal plan, but rather, the boss of it. Ironically, this leaves us feeling disturbed, disempowered, disconnected, disconcerted, dismayed and disheartened. Powerless. Stripped spiritually naked and scared to death. This is not only sad it is dangerous.

In all my years of cross-cultural ritual research, I have never come across any mention of traditional ceremonies with which to mark a blue moon. But I sense that a contemporary one is in order. Crucial really. I say, let us seize this once-in-a-blue-moon opportunity to tranceform our sadness into strength.

We can start by stopping. Taking the time, noting the process, tuning in, staying with the program. Listening with open hearts to Mother Moon's melancholy lament.

This New Year's Eve, I propose a lunar rite of passage into the power of positive change for the next decade: A True Blue Ceremony in the Spirit of Universal Beneficence. It seems suitable to me to strike a blue mood. The lights are shaded blue, of course. Blue pine incense is lit. We are bathed in an airy wash of cool blue. Dressed in our best blues, we sip some sort of berry infusion. Drink in its navy depths. We put bluebells in our hair. We have become like the Tuaregs, the "blue people" of the Moroccan Sahara whose skin becomes imbued with the indigo dyes of their robes. A becalmed blue aura surrounds us. We are emerged in an ocean of blue: the blue of the sea, the blue of the sky, a morning glorious blue.

We symbolically cleanse and bless the streams, the rivers, the ponds and lakes, the big blue sky, the very air we breathe -- the entire biosphere. We use bluing as our purifying agent. It's what our mothers and grandmothers bought in bottles or little wrapped cubes, to add to their wash. The same as those little blue flecks in modern powdered laundry detergents.

We dip the blue balls into water and paint emblems on each other's foreheads with the cobalt paste. We anoint each other with blue blessings. We pledge our affinity as co-creators of the working blueprint plan for a new paradigm. We pray for possibility, for a new perspective. We light bright blue candles for illumination and spiritual guidance.

We chant for peace. We chant. We drum. We dance. We spin for peace, for passion, for promise. For the power of our path and purpose. We slow to a stop. Stilled. Sated. Steady. Strong. The blue air is charged. We are changed, united in azure energy.

So from me, at a moon, worn as if it had been a shell, I wish you a Happy New Year tomorrow and onward!