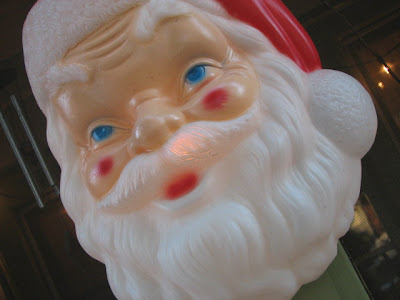 is I believe in magic...

Now it appears that science is on my side as well.

Here's an excerpt of NPR's review of Gregory Mone's book The Truth About Santa: Wormholes, Robots and What Really Happens on Christmas Eve.

Getting presents to all the good little boys and girls every Christmas is a monumental task for Santa Claus — and it's led some children to question how he does it.

In The Truth About Santa: Wormholes, Robots and What Really Happens on Christmas Eve, author Gregory Mone explains the elaborate systems that make it all possible.

"I think part of the reason people look at Santa and say it's all magic, is that his job does seem impossible, this notion of getting around the world and visiting all these homes in a single night," Mone, an editor at Popular Science magazine, tells NPR's Renee Montagne.

But Santa's secret, Mone says, is that he uses tools that are hundreds of years beyond what we have at our disposal.

"As a result, it does seem like magic," he says. "But it's really all science and technology."

For instance, Santa's red suit: It's designed for the extreme conditions he encounters while traveling at warp speed and bending space and time. And, Mone says, "Santa's suit is laden with what are called metamaterials, which have the effect of bending light around a person so that they turn invisible" — which can come in handy if there are curious children peeking during his Christmas deliveries.

Santa's reading glasses, which contribute to his quaint image, are actually equipped with what's called a "heads-up display." When Santa looks through the lenses, he sees a range of information about the residents of the house he's visiting, the presents to leave, directions to the next house and more.

He also has a special device to ensure he doesn't double up on presents under the tree.

"Santa knows what we want, but he doesn't really know what presents to leave for a given kid until he gets to the house and looks under the tree," Mone says.

But Santa doesn't have time to unwrap and rewrap all the presents. So he uses a terahertz wave radiation scanner to see through the wrapping and make out the shape inside, indicating which toys are already under the tree. That way, he can leave a different one.

The latest research in the social sciences has also had an effect on Santa's operations. Mrs. Claus, who's particularly fond of the works of Harvard University child psychiatrist Robert Coles, convinced Santa that positive reinforcement would be more powerful in altering the behavior of "naughty" children.

Because of this, Santa no longer leaves coal in their stockings.


And here's your wack-a-doodle Carol of the Day: