It's a big world 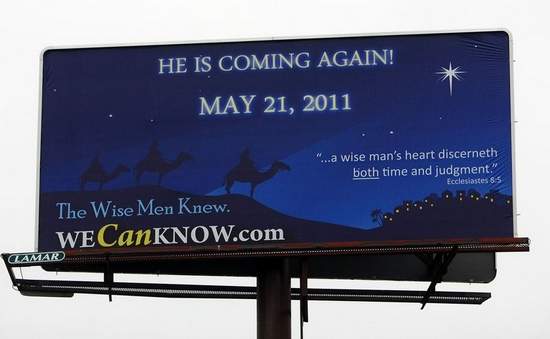 It's a big world. That's my mantra of choice sometimes, particularly when I see billboards like the one above all over town. That sort of thing usually doesn't show up in the streets of Los Angeles, aside from the random corner of Wilshire Blvd. with dull-eyed picketers calling out to the flip-flops that God is coming to wreak revenge on your sinful soul. I crossed Wilshire Blvd. one afternoon with my son Oliver who wondered why and what these people were talking about. They look hungry to me, is all I said to my son. I don't think they really know what they're talking about. I used to ride the bus to work in New York City from the Upper West Side through Times Square and on to Grand Central where I was the assistant pastry chef at a giant hotel. There was a man standing on a crate for what seemed like years in Times Square (before the Disneyification of the area), and he shouted about the lord and Jesus so loudly that you could hear it through the bus windows, over the honking horns. It's a big world, is what I thought, and I thought that, too, when I read about people who like to dress up like stuffed animals and hold conventions and walk around in their costumes and call themselves Plushies. I attended a healthcare conference once in Orlando and had lunch in a hotel that was hosting an international Plushie convention, so I know what I'm talking about. It's a big world, and you can't make that shit up. If Jesus is coming on May 21st, I hope he deals with stuff like THIS in Florida but somehow I don't think he will. It's a big world.
Posted by Elizabeth at 8:00 AM

Email ThisBlogThis!Share to TwitterShare to FacebookShare to Pinterest
Labels: it's a big world, Jesus, Plushies