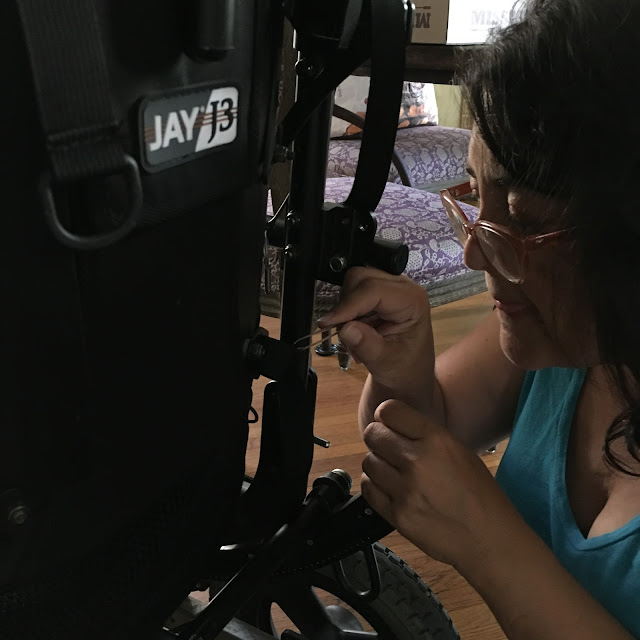 Sophie has a wheelchair that we received after about nine months of wrangling with the various agencies and insurance companies. It cost just under $10,000. All the paperwork is in a file that I labeled Sophie's Chariot.  Yesterday, I spent about thirty minutes trying to thread one of the straps back in so that she could be secure. I used tweezers. I fixed the Chariot.

I had an interesting discussion on Facebook the other day on a thread responding to Florida Senator Rubio's assertion that he wouldn't support abortion for those fetuses affected by the Zika virus. Since I've basically weeded out or hidden all my "friends" that have right-wing viewpoints (in the name of sanity during an election year), the comments were predictably liberal-minded with much derision toward Rubio. Given that the man also believes that a fetus should be carried to term even if the woman has been raped or in cases of incest, I was not surprised by his vehement response.  I should make my own assertion here that I am, of course, utterly "pro-choice" and do not believe anyone has the right to tell a woman what to do with her body, including the fetus, should she become pregnant.

Marco Rubio can go f*&k himself before telling me about the sanctity of life.

Where I get squirmy, though, is the talk about aborting children with microcephaly.

This is a post about some squirmy stuff. I don't want to argue and will just present what I'm thinking about when I hear people talk about Zika and microcephaly and abortion, and before there was even knowledge of Zika, these would have been the same thoughts regarding abortion and any sort of disability.

Again, I am decidedly pro-choice and believe unequivocally that it's the woman's right to make decisions regarding her body and that, should she make the decision to have an abortion for whatever reason, she has full and equal access to the procedure with her doctor.


Here are a couple comments from the Facebook thread:

My first thought is how everything -- literally everything -- is reduced to economics -- or how should I say it? -- worth and value. These children, born of women infected with the Zika virus, are not just a great burden to their families but also to society. This kind of reasoning reminds me of how people argue against the death penalty by stating that it's "more expensive to kill people than to house them in jail for a lifetime." Again, I'm just throwing out some of my thoughts here.

What if we shifted the whole paradigm and asserted the primacy of the vulnerable, how the disabled bring a certain light to the world and evoke the best in the rest of us. I'm not implying that there's a reason for suffering, a plan or some sort of divine imperative. I don't believe in God that way. I believe more in chaos and, perhaps, meaning wrought from it.Sophie is not here to teach me through her seizures and silence, but I am here to learn what it is to truly love.

Anybody ever tell these 'interventionists' about the kids that won't be born, because the one they compelled to be born will take the time, energy and finances of the potential kids a couple might have had, were they not over-burdened with the deformed child an abortion could have prevented? Seems to me, there are more potential children condemned to "death" than the fetus the anti-abortionists insist on bringing to term.

Hard as it might be to believe, over the last couple of decades, I've had several people ask me whether I would have aborted Sophie had I known she would have refractory epilepsy and severe developmental disabilities. The hard to believe, for me, is the audacity of the asking, not the answer. I have learned to literally live the questions and not the answers. I have no answers. I've said it before, but I hold opposing thoughts and ideas at once. My hands, you know, are large and strong. When I was pregnant with Henry, I declined an amniocentesis because I already knew that we never know. I was thought a fool by those who advised otherwise. Fools never know. When Sophie was diagnosed, I mourned for what seemed like lifetimes. I mourned the loss of the baby that I thought I had carried and then brought into the world. I thought that she had been replaced by a new baby until I realized that she, Sophie, was always who she was, had been so since spark and stardust and love created her. The mourning never stops, but neither does the love.

Remember hands, how much they carry. It is both terrible burden and incredible honor to care for Sophie. I couldn't do it again and I'd do it again, And not but.

Posted by Elizabeth at 8:19 AM