Seizures and the Full Moon 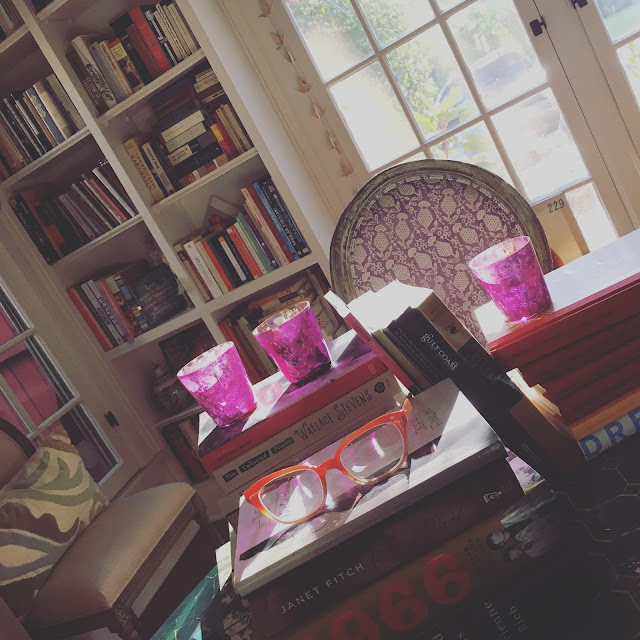 I realized this morning that I hadn't posted a follow-up to Friday's dire post about Sophie's seizure clusterf*@k. I expressed my gratitude on Facebook toward all those people who sent us such loving and encouraging words, but I neglected to do so here, so thank you, thank you, thank you for buoying me. Sophie hasn't had a day that bad in a couple of years, and I have no idea what prompted it. I have several friends in the seizure world whose kids had particularly difficult days last week and over the weekend, too. We all did the dance that I alluded to in my last post, and we all, in our weak attempts at control, tried to figure out why.

Was it the full moon? Possibly, as many of us are convinced that full moons exacerbate seizures despite there being no "scientific evidence or correlation." The fact that our kids seize regularly and more violently during full moons is generally reduced to anecdote by the great and almighty Science Community. We of the tiny little mother minds™ are apparently just howling at the moon in between wiping our children's brows, preventing their limbs from banging into furniture as they seize, agonizing over whether or not to administer rectal Valium (because the after-effects are so awful), syringing liquids in them because they've forgotten how to swallow between the seizures and the drugs and weeping on the sides of beds at the goddamn relentless of it all.

So, Sophie is home from school today, recovering. I hope. She is refusing liquids -- or not exactly refusing but rather having difficulty taking them. She reaches for her sippee cup and brings it to her mouth but doesn't seem to remember how to suck out of it or how to swallow other than in gulps. I am, basically, force hydrating her, dropping 1 ml syringes of liquid into her mouth and rubbing her cheeks and throat. Last night at dinner,  I compared myself to the British police force-feeding the Irish Catholics and suffragettes. The boys were horrified. Every now and then, the instinct to purse her lips seems to come back, but then she flings the cup away. I've resorted to looking in her eyes and threatening the hospital and IV liquids if she doesn't get it together. This is, of course, in my mind. I don't actually say it. People love to say that extreme parenting teaches you to not sweat the small stuff. It's been my experience that the small stuff is often what breaks you, and this weird liquid strike has the potential to break me every single moment. OK. I broke and wept this morning after getting 4 ounces into Sophie and wondering for one impossibly long moment whether she had permanently forgotten how to drink and swallow. It's happened before, though, so I'm hoping that she'll regain the skill as the drugs leave her system and things calm down with the waning of the moon.

My friend S who is no stranger to extreme parenting (and far more extreme than I despite her son being less than a third of Sophie's age) gets the grand prize of cheering me up the most.  When I shared that my tiny little mother mind™, in its dogged attempts to control the situation, believes that the full moon might be the cause, she revealed that her son had had a brief and unusual seizure with the full moon but had never heard of that theory.  Here's a snippet of our texts: 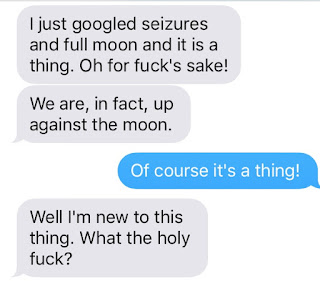 But her best comment -- the one that released me from my angst and made me laugh long and hard was this: 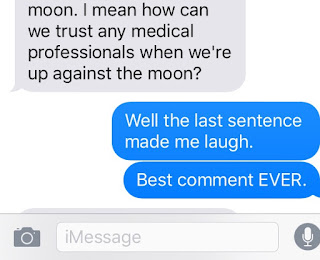 We both agreed that the whole thing is particularly frustrating because we -- well -- love the moon.

I'm a little giddy from the loss of sleep and Force-Feeding of Liquids. Can you tell? Saint Mirtha is here, though, to relieve me, so I'm going out with Oliver. Thank you again for all your love and support. I could never, ever do what I'm doing without it.

Posted by Elizabeth at 1:01 PM