Scenes from a Tennis Tournament 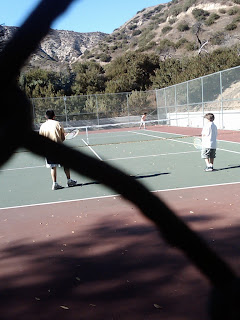 You're too short to play us, said the boy looking Oliver up and down when we arrived at the public tennis courts.

Oliver looked at me, nervously, but he also rolled his eyes.

Why is that? I asked.

Well, you know. When you're short, you can't reach high to get the ball. That's why Russians play the best tennis. His Russian grandmother, sitting stoutly on the bench next to me, nodded.

Hmmmmm, I said, Roger Federer is one of the best players in the world, and he's not particularly tall, is he? Plus, he's SWISS, and Oliver is half-Swiss.

That the boy was wearing a gray, ribbed wife-beater with navy athletic shorts and white socks and brown open-toed sandals on the tennis court, didn't seem to impact his confidence in giving a constant stream of advice to the other players. He pushed his heavy, black glasses up his sweaty nose whenever he missed the ball, which was a lot.

Posted by Elizabeth at 7:31 PM