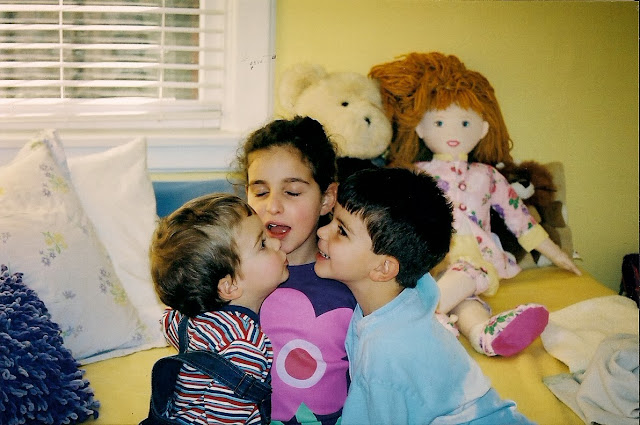 All this waiting and talk of miracles makes me nervous, so let's bring it back down to the everyday.

I'm enjoying going back through photo albums, of which I have many, and especially as my boys get older and bigger and more -- let's say it -- teenagerish, I'm trying to remember what it was like back then -- in the olden days. Those two boys right there are growing up, and they're taxing me more than I can elaborate on the old blog. Let's say this, too: they don't kiss each other anymore, and their interaction with Sophie is minimal. I think about it every single day but write about it even less -- the toll the seizures have taken on those boys.

Wouldn't it be incredible if Sophie's seizures stopped? I said to Henry yesterday as we got ready for dinner. (By the way, she only had a scattering of seizures yesterday and was otherwise quite calm, if a bit sleepy.)

I want her to talk, Henry said. He hasn't said that in a long time. When he was small, he wished on birthday cakes and threw coins into fountains with that wish. He whispered it into my ears and probably Santa's. During the first couple of years of Catholic school, when he got a bit Jesusy, he told me that he prayed every night that Sophie would talk. When she didn't talk, he told me that he didn't believe in God, and I told him that I understood but that we don't ever really know why things happen and why they don't. I don't know when the desire for her to talk or the wish that she'd be "normal," began to fade for him, but I imagine it's happened as subtly as he has grown up and away from the boy you see in that photo.

Do you want her to talk so that she seems more like a normal person? I asked him. Asking questions of a fifteen year old boy is like fishing or maybe even plumbing. You put the bait on the line and fling it out, far. Then you start reeling in, slowly, before you lose your concentration or nod off. When things get stuck, you need to put your hands on your hips, cock your head and just look around, first. There's no telling whether it's just stopped up from everyday stuff or there's something more insidious, like tree roots and dirt in the mainline. I can fish and plumb with line and snake.

Sort of, Henry answered. I really just want to know what she has to say.

About the marijuana? I asked, or whether the seizures bother her?

About everything, Henry answered. I want to know what she thinks about it all.
Posted by Elizabeth at 12:14 PM