A Tale of Tails, Chained 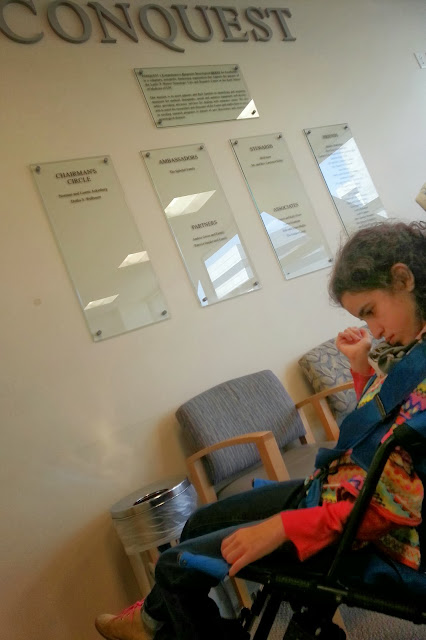 On about hour five of seizures, neurologists, and waiting rooms, I felt a tail, trailing behind me, when I lifted, or heaved, Sophie up onto an adult examining table this afternoon to change her diaper. She had already had so many seizures. I was stifling bereft. This has got to stop, I might have thought or said aloud. I can't do this anymore. I felt the tail, its scales the years, too many years. I drag it.  Later, still more seizures and back in the car, I heard on the radio that traffic was backed up on the 101 North because of some obstruction in the middle of the highway. I'm not sure what the problem is, Kayjon Cermak of KCRW said, her voice attractive, lilting into laughter. Oh, Kayjon, you save us with your tales of road rage and obstruction, mattresses and ladders fallen off of trucks, fistfights on the side of the road, looky-loos. Oh, yes, here it is. There appears to be a large chain in the street, Kayjon elaborated, Watch out for that around Normandie. My car crept onward, north, while Sophie seized. My lips were tight closed, a trail, a tail behind me of years of doing this. I started at the sound of a police whistle and focused on an officer on a motorcycle, weaving in front of me, back and forth between cars, getting us to slow down from 10 miles an hour to 5 and then 0 and then we were stopped, in a line. The motorcycle was directly in front of my car. He climbed down off it, brown pants, the knee-high black shiny boots, the mirrored sunglasses, the bow-legs. He held his hand out, palm facing us. Stop. I think asshole, I see you and we're already stopped in the middle of the 101, where the hell else would we go? I imagine the perhaps tens of thousands of cars behind me, a tail, a trail of metal and stifled bereft. I am not making this up. The policeman turned around and stepped toward the middle of the highway, reached down and pulled up a long coiled chain in his black gloved policeman hands. He heaved it up and hauled it over and just before he reached the side of the road, he threw it, the chain, this metal tail, over the guardrail and into the brown highway brush. He was made for that moment, I decided, and was dressed for the part. When he was done, he turned to us, the front cars, gave us the signal to proceed and climbed onto his machine and took off. The beast moved forward. No gangs to bang or bust or pillaged villages to rescue, no girls in distress or crimes of passion. He could drag a chain, a tail, from the middle of the road and let it go. Let it go. Let it go. Let it go.
Posted by Elizabeth at 10:17 PM

I'm reading: The Mere Wife by Maria Dahvana Headley
Movie I saw last: Sheltering Sky
I wish I had: a new President, a finished book, a million dollars and a cure for seizures. Is that too much?