The Entrepreneur, Halloween, Christmas and The House of Crazy 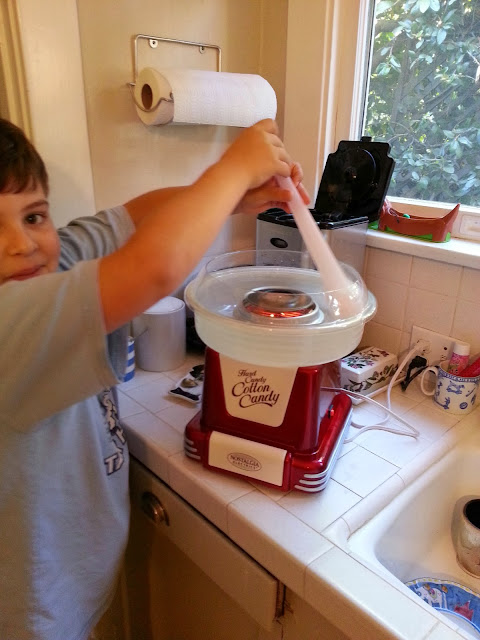 If I told you the past week chez House of Crazy was crazy, it would be an understatement. Raymond Chandler and Santa Anas aside, between the Seizing Marijuana Chronicles and The Teenager and The Dyslexic Entrepreneur, I've been hard put to remain not just calm but even somewhat collected. I won't even go into The Husband. I've been wearing sunglasses all week to disguise my tears and have walked around the house whimpering when they're all at school. I've told you over and over that my Italian grandmother used to do so all day, whimper, sigh and mutter under her breath pray that I die, pray that I die. Last night I made a valiant and last ditch effort to cheer the Dyslexic Entrepreneur who had finished a horrific week of school that included about 5,321,789 emails back and forth to The Powers That Be at the school and the passing, Santa Ana-induced thought of homeschooling. He had just climbed into the car after baseball practice and begun another historic rant of negativity, how I suck at baseball and just about everything and how I'm just going to give it all up and be a giant loser, I'm really not supposed to be in this world, and while my eyes glazed over and my ears dripped blood, the tiny thought entered my mind, the valiant thought that I then actually voiced:

Why don't we go to Cost Plus World Market and get you some stuff for your lemonade stand?

If you're familiar with Los Angeles on Friday nights, and particularly with our local outdoor shopping mall called The Grove on Friday nights, you'd know just how outrageous this suggestion was -- how it was more the last ditch effort of a dying woman (pray that I die, pray that I die) than of a reasonable or even good enough mother. We went. We nearly killed ourselves wrestling a giant Exxon Valdeez SUV for a parking spot, and we walked the Christmas decorated clogged aisles (pray that I die, pray that I die) until The Dyslexic Entrepreneur decided that he'd use some of his earnings from last week's lemonade stand to buy a cotton candy maker for this week's stand. And given that I was dying, had contemplated buying some admittedly adorable silver-flecked Santa ornaments and wouldn't be spending the money myself, since the Dyslexic Entrepreneur has actually made about three times as much as it cost,  I said yes.

What's really cool about the cotton candy maker is that you can throw candies in the top to flavor the sugar.In fact, that photo of The Dyslexic Entrepreneur was taken at about 10:00 this morning, and his product became his breakfast. In addition, we're going to start decorating for Christmas early this year at The House of Crazy by putting silver flecks on the pumpkins and draping spider-webs over the life-sized Santa Claus that's sitting on my porch, a "gift" from my parents. The weird thing is that I'm no longer praying to die but actually getting excited.

Reader, what are you doing?

Posted by Elizabeth at 2:00 PM