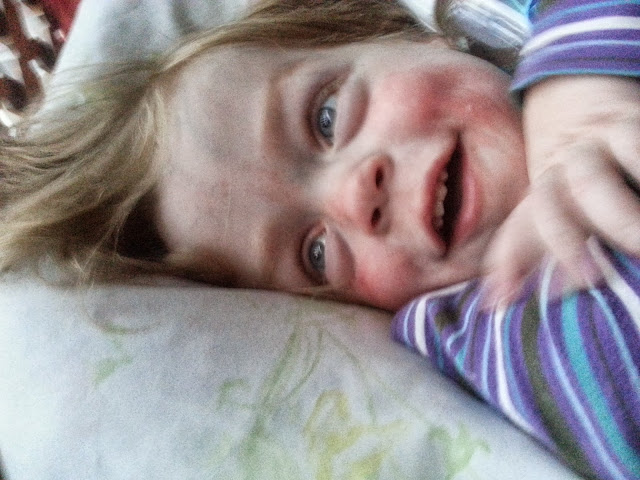 This is Kerry, and barely a week ago, she died unexpectedly after surgery to correct a vicious infection. Kerry was three years old. Kerry's mother, Kristin, a woman whom I have never met, sent me the following email a few days ago, and I was quite suddenly yanked up and out of the abyss where I had been resting.

Hi there Elizabeth, I wanted to reach out to you for thanks.  Our three year old daughter, Kerry, passed away almost a week ago.  Her service was held just yesterday at our family's church.  Your extreme parenting video was shown to the 200+ people that attended. Kerry was diagnosed with infantile spasms shortly after her first birthday, and I so appreciated you and the rest of the bloggers I found that were able to put into words what I was and am are unable to express. During the service our pastor mentioned your "her eyes will sustain you" as a particular image that stood out to him.i just wanted you to know that your video has reached so many people, and to thank you for putting into words what I have been feeling these past three years.Thank you more than you will ever know,

Contrary to what some of you might think or even be feeling yourself, being yanked out of the abyss where I was resting was not, emphatically not, because I felt blessed, because my children were alive and not like little Kerry, gone far too soon. Kristin's astoundingly generous email to me and to you, the other parents that participated in the extreme parenting video, didn't separate me from her or my Sophie from her Kerry. I did not, for a moment, think Oh, thank God. Them, not me. Her, not her. Kristin's hand didn't reach into the abyss but was, I think, always there. I have been struggling to articulate this for days, this grace that descended in the form of an email from a stranger.

We are all connected. All the time.

Since that email, I have exchanged many words with Kristin and learned a bit about her beautiful little girl Kerry. Kerry and her twin brother Matt were born early in Colorado to parents who had long awaited children. It was clear that Kerry had some congenital abnormalities, and soon after birth she had her first seizure and was later diagnosed with infantile spasms. While the seizures were quickly controlled with medication, Kerry had developmental disabilities and made slow progress, but her family provided her with all the necessary treatments and of course, love. Kristin wrote this:

Therapies continued, head control was getting stronger, more avocados being eaten, plans being made for preschool and we got braver when taking her places in her toddler wheelchair.  I did not handle the stares well, I must say.  Many "chin down, eyebrows up" looks from me to people who looked a little too long.  She also loved to sing...her songs were mostly drawn out vowels mixed with short consonants, but they were truly her.  She supplied the soundtrack for our days.  Scarves became her favorite texture, she would feel and stroke the fabric against her skin...finally found a use for my mothers satin pillowcases!


Kerry died after surgery to correct a massive infection in her ear, and Kristin told me that she hopes that her little girl is not forgotten. Please help me to help Kristin know that Kerry will not be forgotten, that this little girl who loved avocados and scarves, who sang to her family and provided the soundtrack to their days, is connected to each of us. Please let Kristin know that we are connected, all the time. 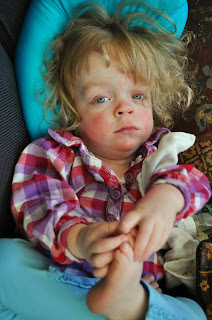 Thank you, Kristin, for sharing your little Kerry with me and for allowing me to share her with others. I am so sorry, so saddened by your loss, by our loss. We are all connected. All the time.
Posted by Elizabeth at 9:20 AM