How We Do It: Part XXXVI in a series: Too Many Hands 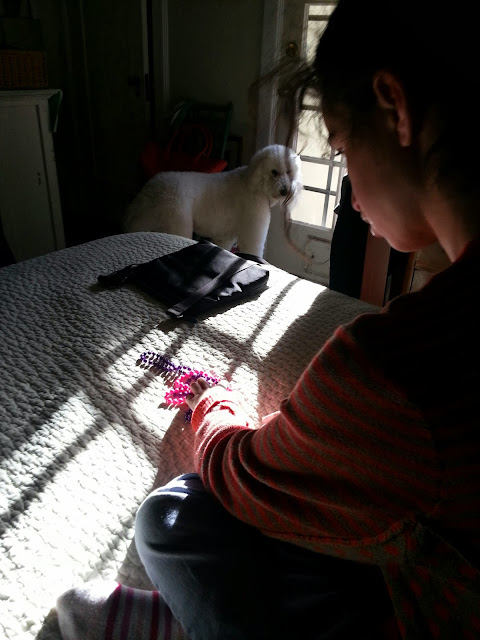 The moment Sophie was diagnosed with infantile spasms when she was three months old until this moment, nearly nineteen years later, she has been subjected to and participated in any number of therapies. There were the traditional ones: physical, occupational, speech and language, anti-epileptic drugs and tests to figure it all out. There were the alternative and integrative ones: the healers, the osteopaths, the nutritionists and homeopaths, the music and art and augmentative technology and Alexander Technique and Chinese herbs and acupuncture and the laying on of hands. Of those two distinct groups, I will confidently say that the first did nearly nothing, in the end, to stem the tide of seizures and their effects on her development and quality of life. I reminisced yesterday to a friend about the first three years of Sophie's life and then again when we moved to Los Angeles: the endless therapy visits, the sitting in waiting rooms and trudging up and down New York City streets with Sophie in her stroller, then later in a car-seat with two babies, up and down the highways, into the valley and to the west side. No more need be said about the vaccinations that harmed her, the more than twenty drugs that rendered her sleepless, irritable, dizzy and doped, sometimes anorexic and always, always, the seizures kept coming. So many hands. The second group, namely the osteopathy and the Chinese medicine and acupuncture, in certain instances, stopped her seizures (atonic drops with Chinese herbs), but most importantly afforded her more potential and greater comfort. Still, the seizures came, as did puberty (early) and very little else. I doubted what I was doing as much as I knew it was our only option. There were nights when voices and hands spoke all at once in my head, and I lay there, silenced. So many hands. Every three years or so, in the beginning, I was overcome by the all of it -- the all of it -- by what I decided to call too many hands.

Effective, ineffective, harmful, good -- it's just too many hands.

I stopped all of it, then, shut down the voices, picked one or two things, weaned the drugs, refused to add more, laughed with rue, sprouted ounces and gray hairs, tousled with resentment and swallowed grief, wrote and sat and wrote and sat  -- a sort of giving up and giving in, a surrender that keeps hopeful.

I feel a bit of that with Oliver, too, right now. Too many hands.

It's time to stop and think. Listen to my own still, clear voice, above or maybe below those fluttering, well-intended hands.
Posted by Elizabeth at 12:00 PM

Email ThisBlogThis!Share to TwitterShare to FacebookShare to Pinterest
Labels: alternative medicine, Chinese Medicine, Disability, How We Do It, Oliver, Sophie, therapies, traditional medicine