Our morning wasn't so good. The boys were already at school, and Sophie was sleeping so peacefully on her back, mouth wide open, that I didn't want to wake her (long ago, we decided that Cardinal Rule No. 1 is never wake a sleeping Sophie), and she slept like that until 10ish when she finally woke up and had her customary bout of morning seizures. They go on for what seems like forever and I just NEVER GET USED TO IT. I finally drove her to school around noon and wandered around town in a daze before treating myself to some peanut noodles at my favorite local restaurant. I'm actually tired of writing about the seizures, though, and really only wanted to post a poem and a photo. And they're antithetical -- one an exaltation of human life and the other of nature.

Here's the poem, pulled from a recent issue of Spirituality and Health Magazine:

As I walk mornings down Bleecker Street,
I meet ten saints with filthy demands.
The tenements shout with holiness,
God reels by or sleeps on the curb,
at home everywhere in the wrecks and bars,
in the stale tobacco and business,
and everything that's wild and absurd,
like madness with madness and holding hands.

I had rather ten faces than ten birds.
I don't sense deliverance in a tree.
There is no impossible in lakes,
there is more miracle in a crowd
than in a Rocky Mountain or me.
There is more holiness in an eye
than in a scroll of holy words.
God's here, thank God, in the market place!
Viva the Signor of warts and turds!

And here's the picture: 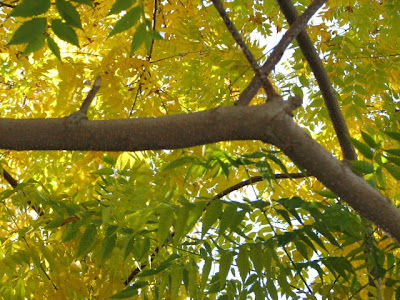 Remember the blanket of yellow blossoms on my yard? After it dropped all those flowers, the blossom clusters turned bright pink, then brown and then they shed. And now, the leaves, in a crazy, Los Angeles delayed fall kind of thing are changing from green to yellow. And it's just glorious, really, this tree in my front yard. I don't look on it as a harbinger of anything, really, fall overlapping winter, a blaze of yellow against the blue sky and somewhat ludicrous in front of my tiny house. "I don't sense deliverance in a tree," the poem says. The skeleton that will be left there, when the last bit of yellow falls is probably only weeks away.
Posted by Elizabeth at 11:42 PM