this post is dedicated to my friend S.S., another goddess of
non-verbal communication 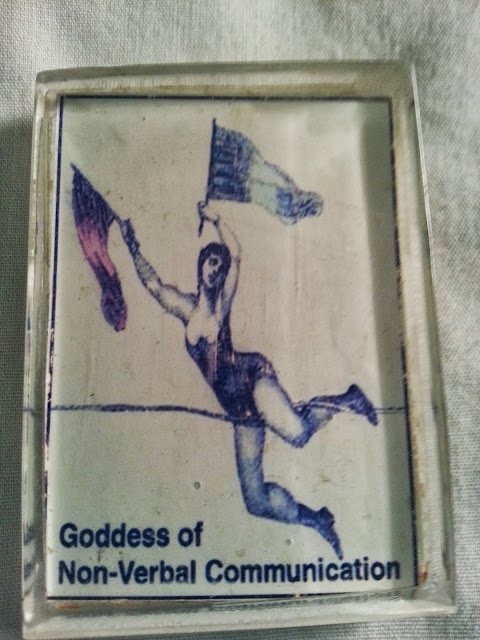 That's a small lucite square that I found in a gift shop, years ago, on the marked-down table. What are the chances? It's kind of ugly, but it's also kind of perfect. I often compare my life to that of a tightrope walker, and this goddess appears to have stumbled but is catching herself just in time. This week I have that weirdly called IEP where I suppose I'll be going head to head with Mr. Red Who is Purple, the speech and language pathologist who mentioned that he wasn't going to recommend that Sophie continue to receive AAC (alternative and augmentative communication) services from a non-public provider. According to Mr. Red Who is Purple, Sophie doesn't respond to the iPad. That this is total bullshit doesn't need continued explication here. It's total bullshit. While her "response" is not always consistent, the iPad has become a fixture in her life, tying her to her classmates socially, allowing her to participate in her classroom activities, providing her with entertaining and accessible games and things to watch and interact, and allowing her some modicum of communication.

Mr. Red Who is Purple is a gentle and unassuming man, at best, a Luddite in the middle and an utter joke at worst. The other order of business will be to strike out the strait-jacket like device that was provided to us last spring for Sophie to wear on the bus home. The fact that it was entirely the wrong device and entirely inappropriate for Sophie as it's intended for children who pose a danger to themselves and others by disruptive behavior in the bus was enough to send the LAUSD bus division into a clusterf&*$k of hilarious proportions, and the only way they will now allow Sophie to ride the bus without it is to hold another IEP to strike it from the record.

Do you follow me or have you run screaming from the room?

In the early hours of the morning on Thursday, I will set up my tightrope in the dark and gloomy conference room at Sophie's high school. I'll strip off my jeans and tee-shirt to reveal my worn and slightly ragged leotard. I'll lace up my ballet slippers, adjust the top of my leotard to better showcase my cleavage, stick a chopstick in my hair to use, later, as sword, and powder my hands. I will set this small lucite square in the middle of the conference table over which I will walk and dance and twirl and tarry, my flags waving over the the red and purple and black and white and brown heads below.