How We Do It, Part XXXII in a Series: Inappropriate Parenting 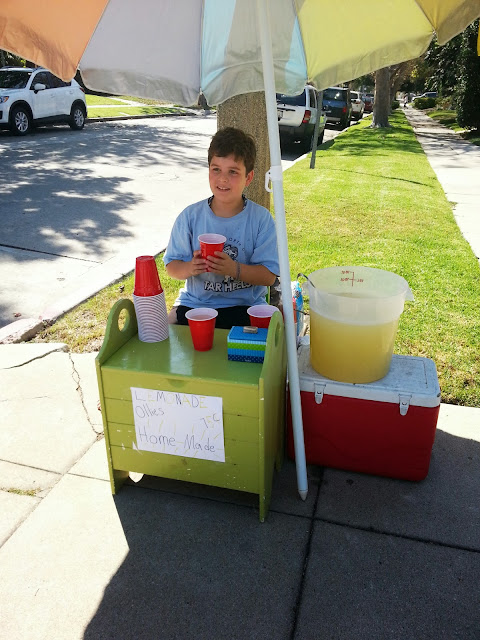 Oliver and I took a walk down La Brea to the Goodwill Store. I pushed Sophie, and Oliver rode his skateboard. It was abominably hot. I hate Goodwill stores, but I have grown a boy inside my belly who not only hates to read but lives to go through junk and then collect it. We wandered through the Goodwill, and I effectively persuaded Oliver not to purchase a photo of  Mike Piazza, the former Dodgers player who my older son later claimed took drugs. The photo cost $10 which I told Oliver was way too high for such a thing, and even though he wanted to buy it with his money that he'd earned by setting up and selling the world's best lemonade yesterday (a shocking $83 take!), I told him, no, that's not a smart purchase, at all. For once in his short dozen years on the planet, he listened to me, but he also left the store considerably more surly than when we entered, and since it was still boiling hot outside, and Sophie was humming in her wheelchair, crossing and uncrossing her legs in what appeared to be discomfort as well as emanating a highly suspicious smell, I, too, felt grumpy. When we rolled past the giant plate glass window of a fabric store, behind which sat two plump girls sitting on a couch in air-conditioned splendor, the glass nearly shattered from their baleful stares at Sophie in her wheelchair. I mouthed at them to STOP STARING in my sternest voice, and Oliver looked at me and said that he felt like giving them the finger and I said, Go ahead, and he looked at me and I looked forward so I didn't see whether he'd taken me up on it.

Sometimes you've just got to give in, Mom, Oliver said.

And I agreed.
Posted by Elizabeth at 5:06 PM

Email ThisBlogThis!Share to TwitterShare to FacebookShare to Pinterest
Labels: Disability, handicapped stares, How We Do It, lemonade stand, Oliver, Sophie